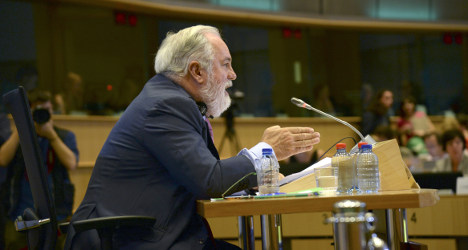 The new European Union Commissioner for Climate Action and Energy Miguel Arias Canete, from Spain, at his hearing at the European Parliament in Brussels on October 1st. Photo: Thierry Charlier/AFP

Cañete has been forced to wait after a fiery confirmation hearing on Wednesday which saw green and left-wing groups in Brussels attack him over alleged conflicts of interest after he sold his shares in two oil firms shortly after his nomination to the energy job in September.

A last minute revision by Cañete to his declaration of assets also saw the bearded MEP receiving criticism.

During the hearing, Cañete repeatedly defended his position saying his family had no links to oil money.

But after the hearing, opposition groups called for a delay on his confirmation so that the European Commission's legal team could take another look at his revised declaration of assets and possible links between the Spanish MEP and the oil industry.

That team has now green-lighted Cañete's nomination, meaning that only a vote of confirmation remains.

However, Cañete still faces an nervous wait to see if this takes place.

While experts say his confirmation is guaranteed because of a pact of non-aggression over his appointment which will see him confirmed by the left if the conservatives say yes to the French candidate for economic affairs commissioner Pierre Moscovici, the outcome remains uncertain.

Before Wednesday's hearing, more than 300,000 people, had signed a petition against his appointment.

There was also a "Stop Canete" protest by the Greens and the radical left outside parliament. A manifesto produced by the group was signed by at least 76 MEPs.

At the hearing, the Spaniard also apologized for alleged sexism after making macho comments towards a female rival at a debate in May. He said he had gone soft on his socialist rival because she was a "defenceless woman”.