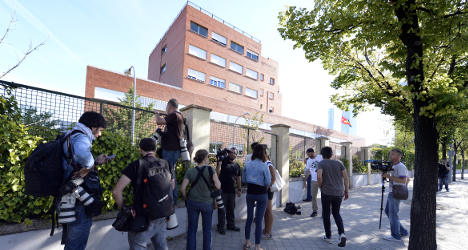 Journalists stand outside the Carlos III hospital after the arrival of Roman Catholic priest Miguel Pajares, who contracted the deadly Ebola virus, in Madrid in August 2014. File photo:

– Two other people have been isolated because of fears they may have Ebola: an nurse with  diarrhoea but no fever, and an engineer who was working in Nigeria

– The EU has asked Spain for answers over the case

17:50 That's it for The Local's live blog today. Stay tuned for more news on Wednesday and thanks for reading.

16:50: The nurse with Ebola has been named by Spain's La Voz de Galicia newspaper as Teresa R. R. The daily reports she is a native of Galicia's Becerreá municipality, citing local government sources.

She has 14 years experience as a nurse and volunteered to treat Spanish Ebola patient Manuel García Viejo who died of the disease, the Spanish edition of the Huffington Post added.

16:35: Madrid's Ebola case is the top story in the French press on Tuesday.  "We have to stop the paranoia in France" reads the headline on the website for the country's Europe 1 radio station. They have run an interview with a top medic calling for calm.

15:40: There are dramatic scenes at Madrid's La Paz-Carlos III Hospital where the nurse with Ebola and her husband are being kept in isolation.

"It's all the hospital talks about. But we don't know anything, there is a lot of nervousness, disinformation," an emergency room doctor told news agency AFP.

"People are freaked out," said a cardiologist at the hospital, which had been specially prepared to treat the disease and which had put in place strict rules limiting access to the infected missionaries.

"We cannot understand how someone who was wearing a double protection suit and two pairs of gloves could have been contaminated."

15:30: "How many people did the Ebola nurse infect?", Germany's Bild newspaper asks as international media outlets put the spotlight on Madrid.

15:25: It seems even a case of Ebola is not immune from the Twitter comedy treatment: "The Royal Family wants to transmit a message of calm on the subject of Ebola," this tweet reads.

15:13: One of the people currently in isolation over fears he may have Ebola is an engineer who was working in Nigeria, the union CSI-F has said. A first test for Ebola came back negative, union officials added.

14:29 The New York Times has called the Madrid Ebola case "particularly particularly worrisome to health experts because Spain is a developed country that is considered to possess the kind of rigorous infection control measures that should prevent disease transmission in the hospital".

14:09: Health authorities are looking at protocols involving clothing worn by health professionals who treated Spanish missionary Manuel García Viejo who died from Ebola in Madrid as they try and establish how a Spanish nurse contracted the disease, says Spain's director of public health Mercedes Vinuesa.

13:37: Some 200 staff at Madrid's La Paz-Carlos III hospital have gathered to call for the resignation of Spain's health minister Ana Mato

12:57: The nurse with Ebola is being treated with serum containing antibodies of a nun who arrived in Spain on September 25th having recovered from the virus, the Spanish edition of the Huffington Post reports

12:45: The nurse with the disease "progressed well" on Monday night, but has asked that media outlets do not report on the state of her health.

12:42: In developed countries, an epidemic of Ebola is containable, Spanish health officials have said in a press conference.

12:40: "If appropriate containment measures were adopted this really should not have happened," said Jonathan Ball, a virology professor at the University of Nottingham has told news agency AFP.

"The recent report of a Spanish nurse who has contracted the virus… is of concern as it suggests that the barrier methods and training were not sufficient to protect healthcare workers and prevent secondary infection," said virology professor David Evans of the University of Warwick.

Ben Neuman, an expert from the University of Reading, said investigators will have to look closely at the disposal of waste at the hospital where she worked.

"Nurses face a problem in that a person who is sick with Ebola can make quite a lot of highly infectious waste, as the patient loses fluid through diarrhoea and vomiting. Those bodily fluids can contain millions of Ebola viruses, and it only takes one to transfer the infection."

"It's only contagious when the patient has symptoms, and has fever," he adds.

11:00: The EU said on Tuesday it has asked Spain to explain how a nurse treating Ebola patients in Madrid contracted the deadly disease, the first known case of transmission outside Africa. The woman's husband has now also been hospitalized.

The European Commission "sent a letter Monday to the Spanish health minister to obtain some clarification" of how this had happened, despite all the precautions taken, a spokesman said.

The nurse and her husband are both currently in isolation at Madrid's La Paz-Carlos III, Spain's El Mundo newspaper reported on Tuesday.

The health worker is in a stable condition and is not at risk, according to Spanish press news agency Europa Press.

Her husband is also "well" and "relatively calm," sources told the agency.

Authorities in Spain are now investigating how the woman became infected with the virus and attempting to track down people she may have had contact with.

This includes 21 people who wore involved in initial treatment of the woman at Madrid's Alcorcón Hospital.

All of those staff will now be monitored by hospital authorities, according to Spain's El País newspaper.

The nurse arrived at Alcorcón Hospital in a normal ambulance on Monday and staff were not wearing any special protection, the daily added.

The health of a further 30 health workers who had contact with two Spanish missionaries who died of the disease in Madrid is also being monitored by the health ministry, officials said on Monday.

The nurse in the current case treated Spanish priest Miguel Pajares, 75, who was infected with Ebola in Liberia and died on August 12, as well as Manuel Garcia Viejo, 69, who was repatriated from Sierra Leone and died on September 25th.

Both missionaries were members of the Hospital Order of San Juan de Dios, a Roman Catholic group that runs a charity working with Ebola victims in Africa.

Those repatriations were deemed risky by a union that represents Spanish doctors, Amyts.