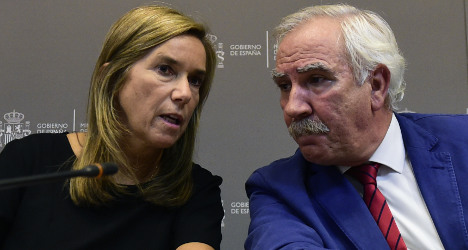 Health Minister Ana Mato said an emergency protocol had been put in place after two tests confirmed the woman had been infected with the virus, which has claimed almost 3,500 lives in west Africa this year.

"We are working to guarantee the safety of all citizens," she told a televised news conference.

The woman was part of a medical team at Madrid's La Paz-Carlos III hospital that treated two elderly Spanish missionaries who died of Ebola shortly after they were repatriated to Spain from Africa in August and September.

She began to feel ill on September 30 but did not go to hospital until Sunday complaining of a fever.

The assistant nurse, who is married without children, is being treated in isolation at a hospital in Alcorcon, a southern Madrid suburb.

Health authorities are trying to track down all the people she may have come in contact with since she became infected with Ebola, Madrid's primary healthcare director, Antonio Alemany, said at a news conference.

The woman treated Spanish priest Miguel Pajares, 75, who was infected with Ebola in Liberia and died on August 12, as well as Manuel Garcia Viejo, 69, who was repatriated from Sierra Leone and died on September 25th.

Both missionaries were members of the Hospital Order of San Juan de Dios, a Roman Catholic group that runs a charity working with Ebola victims in Africa.

Pajares was the first patient in the fast-spreading Ebola outbreak to be evacuated to Europe for treatment. He was hailed as a national hero by many in Spain for his work with Ebola patients.

The missionary was flown to Madrid on a specially equipped military Airbus A310 on August 7th.

The Spanish government's decision to repatriate Pajares prompted concern among health professionals who said that the nation's hospitals were not adequately equipped to handle the Ebola outbreak.

"We are working to see if all the protocols which were established were strictly followed," Pastor told the news conference.

"Spain follows all the recommendations of the World Health Organization," she added.

Both missionaries were treated in isolation at La Paz-Carlos III hospital and the medical team that cared for them were closely monitored.

The assistant nurse who is now also infected went on holiday the day after Garcia Viejo died on September 25th.

It spreads through contact with the bodily fluids of someone who has the virus and the only way to stop an outbreak is to isolate those who are infected.

There is no market-approved drug for treating Ebola yet, and no vaccine to prevent it.

Of several prototype treatments in the pipeline, one dubbed ZMapp has been fast-tracked for use, developed by Mapp Biopharmaceutical in California, in conjunction with the US Army.

Ebola has caused 3,439 deaths out of 7,478 cases across five west African nations — Liberia, Guinea, Sierra Leone, Nigeria and Senegal, according to the latest tally from the World Health Organisation.

Europe and the United States have also been touched by the disease but until now all the cases stemmed from people who caught the virus in west Africa.

In the United States on Monday, health officials said a Liberian man diagnosed with Ebola in Texas had received an experimental drug called brincidofovir, the first time the medicine has been used to fight the virus.

The man's condition worsened from serious to critical over the weekend.

Also on Monday, the charity Doctors Without Borders (MSF) announced that a Norwegian employee had contracted Ebola in Sierra Leone and would be repatriated shortly.

Another MSF worker, a French nurse, contracted the virus while volunteering in neighbouring Liberia but has been cured, according to the French government.

French President Francois Hollande said before the Spanish case was revealed that France was ready to deal with any outbreak of Ebola on its soil.

"We would be capable of providing treatment if any cases occur in France," he said.