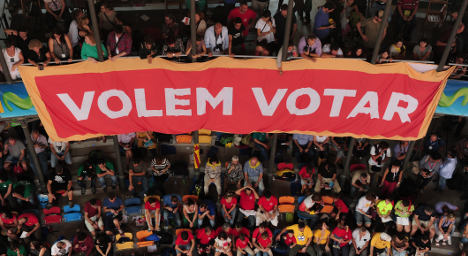 47 percent of respondents said they would vote to stay part of Spain if Catalonia received "new, protected and exclusive realms of authority". Photo: Josep Lago/AFP

The survey also showed that nearly half of those polled would opt for Catalonia to remain part of Spain if it were granted special status, while only 29 percent wanted full independence outright.

Leaders in the powerful northeastern region have set up a clash with Madrid by powering ahead with a November 9 referendum on the issue despite a stay ordered by the Constitutional Court.

The El Pais survey showed that 45 percent of respondants wanted Catalonia's president Artur Max to "comply with the legal decision" and negotiate to find a means to hold a vote which would "respect the constitution".

Only 23 percent wanted Mas to "ignore" the tribunal ruling and forge ahead with the November 9 referendum, while 25 percent wanted regional leaders to find an alternate solution that favoured independence but did not require holding a vote.

The Metroscopia polling institute surveyed 1,000 people in Catalonia between September 30 and October 2, just after Monday's decision by the Constitutional Court to suspend the region's political moves to hold the referendum.

Catalan pro-independence parties declared Friday they were "united" on their referendum bid, which threatens to trigger Spain's biggest constitutional crisis in decades.

They have been fired up by last month's independence referendum in Scotland, even though voters there rejected a separation from Britain. Hundreds of thousands of Catalans have protested in the streets in recent weeks demanding their own vote.

In the survey, which has a 3.2 percent margin of error, 47 percent of respondents said they would vote to stay part of Spain if Catalonia received "new, protected and exclusive realms of authority". Some 16 percent wanted to keep the status quo — as a semi-autonomous region with some margin of self-rule — while 29 percent wanted outright independence.

More than half — 58 percent — also rejected outright one idea being considered in Barcelona as a work-around to the constitutional conflict: a snap vote in which all political parties backing independence would stand together for office on a joint electoral list.

On Friday, Catalonia's government formally decreed the creation of a commission to supervise the ballot, prompting the national conservative government to say it will ask the Constitutional Court to block that decree, just as it has suspended other Catalan legislation this week over the vote.

Spain's opposition Socialists also oppose independence for Catalonia, but have called for a federal constitutional reform to answer Catalan demands.