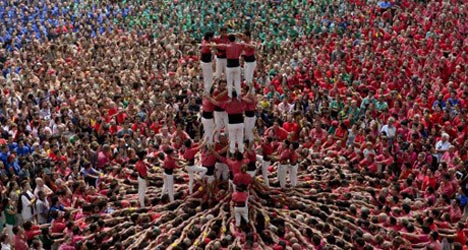 Catalonia's human towers have been declared as a 'Masterpiece of the Oral and Intangible Heritage of Humanity'. Photo: JOSEP LAGO / AFP

The gravity-defying human castles of Catalonia are sources of fierce regional pride. Every town and city neighbourhood has a team and it is considered an honour to be chosen to wear the chosen colours of your colla.

Watching tiny children scramble to the top of these huge human edifices is a heart-stopping sight for newcomers but injuries are very rare. The youngest castellers wear helmets, but those underneath sometimes suffer lumps, bumps and broken limbs if the towers collapse.

This year's spectacular championship event in Tarragona took on a political flavor as huge banners in favour of Catalan independence were displayed.

Check out the Local's gallery of the most spectaular images from this year's celebration of what UNESCO has classified as a 'Masterpiece of the Oral and Intangible Heritage of Humanity'.