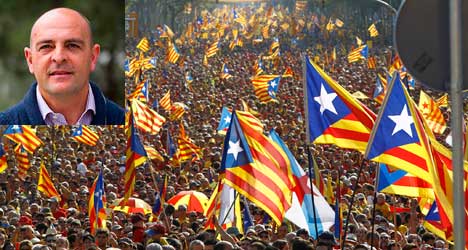 The Professor of Political Science at UAB said that some instututions were "telling people what their vote should be." Photo:QUIQUE GARCIA/AFP/UAB

Brugué, who  is Professor of Political Science at the Autonomous University of Barcelona (UAB), announced his reasons for resigning  via Twitter on Sunday.

The resignation is personal. I accept all the criticisms but I cannot support a consultation that, in my opinion, does not offer democratic guarantees.

Brugué had recently been named as one of seven members of a committee put together to help steer the planned November 9th vote on independence from Spain.

He was put forward by a coalition of Catalonia's Green Party and United and Alternative Left (ICV-EUiA).

According to Catalan daily El Periodico, Brugué felt that municipal institutions were too far inclined towards promoting independence instead of defending the right to decide.

He felt that they were "telling people what their vote should be", using as an example the shouts in favour of independence when Catalan President Artur Mas received motions in favour of the consultation from 900 mayors across Catalonia.

Brugué stated, "It seems we would be doing more harm than good if we went forward with a vote under these conditions."

"I have an inkling and a certain suspicion that we are doing some staging and manoeuvring but that we'll end up doing something different to the consultation," he added.

Catalan pro-independence parties declared on Friday that they were "united" on their referendum bid, which threatens to trigger Spain's biggest constitutional crisis in decades.

They have been fired up by last month's independence referendum in Scotland, even though voters there rejected a separation from Britain. Hundreds of thousands of Catalans have protested in the streets in recent weeks demanding their own vote.

On Friday, Catalonia's government formally decreed the creation of a commission to supervise the ballot, prompting the national conservative government to say it will ask the Constitutional Court to block that decree, just as it has suspended other Catalan legislation this week over the vote.

Spain's opposition Socialists also oppose independence for Catalonia, but have called for a federal constitutional reform to answer Catalan demands.