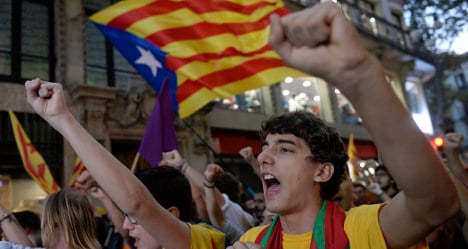 Students in Barcelona protest on Thursday against a ruling by Spain's Constitutional Court blocking an independence referendum in the region. Photo: Josep Lago/AFP

Catalonia’s PP head Alicia Sánchez Camacho told journalists that the pro-independence supervisory body "cannot exist" and announced the PP would challenge it in court with "conviction and tranquility".

On Thursday, Catalan president Artur Mas  continued to defy Madrid by signing a decree paving the way for the setting up of this supervisory body for a referendum on independence from Spain, despite a Spanish court's order that the plan be suspended.

Mas's move came after the Catalan parliament on Wednesday green-lighted the move to create a seven-member "control commission", a type of electoral authority, by 86 votes with 48 abstentions.

The decree will have no legal force until published in the regional legislative bulletin but it sees President Mas treading difficult ground.

While the decree signals an official determination to stage the non-binding poll, the Catalan president earlier this week tried to distance himself from some separatists groups who have called for acts of "civil disobedience".

SEE ALSO: The Local's gallery of ten ways Catalonia could change if it becomes independent

As it tries to a sheen of legality to a referendum Madrid has called illegal, the regional government earlier this week suspended a publicity campaign aimed at promoting the planned November 9th vote on the question of independence from the rest of Spain.

It has also called a halt to the recruitment of support staff on the day of the vote itself, Spain's Europa Press news agency reported on Thursday.

But Mas remains under pressure from pro-independence groups and its parliamentary bedfellow, the staunchly pro-independent ERC party, which has said it is prepared to defy a suspension of the vote by Spain's Constitutional Court.

The powerful Catalan National Assembly (ANC) has also organized mass street protests and are also carry out a door knocking campaign to drum up popular support for the independence vote.

Mas is to meet with fellow Catalan party leaders for Friday as they struggle to forge a common position on how to proceed.

With a distinct language and culture, many of the 7.5 million inhabitants of Catalonia have long complained they get a raw deal from the government in Madrid, which decides how their taxes are spent.

The independence movement has gathered strength in recent years. Catalonia formally adopted the status of a "nation" in a 2006 charter that increased its autonomy, but the Constitutional Court overruled that nationhood claim, fuelling pro-independence feeling.

Spain's recent economic crisis has increased unemployment and hardship in the region and swelled its debts but Spain's Prime Minister Mariano Rajoy in 2012 rejected Mas's request for greater powers for Catalonia to tax and spend.