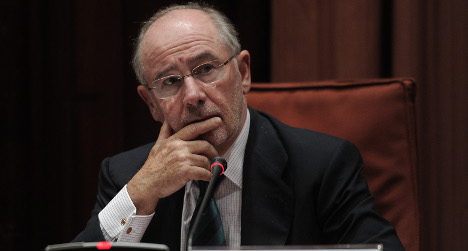 Executives at the two banks allegedly spent €15.5 million ($19.6) million from 2003 to 2012 on everything from restaurants to clothing, with the lion's share of these expenses being racked up by Caja Madrid executives, Spain's anti-corruption prosecutor said in a recent report.

The prosecutor claimed none of this spending was reported to tax authorities.

Now a High Court judge has asked the Bank of Spain to investigate whether the use of the credit cards constituted a crime.

Among the figures targeted in the probe are Caja Madrid's scandal-hit former President of the Board of Directors, Miguel Blesa as well as former IMF managing director and Bankia president Rodrigo Rato.

However, Rato and other Bankia directors in July repaid €200,000 in unjustified expenses, Spain's 20minutos reported on Wednesday, although ABC reported a further €44,200 in Bankia expenses remained outstanding.

Among the expenses racked up on the credit cards were €3 million in restaurant bills, €1 million in travel expenses and €700,000 on clothing.