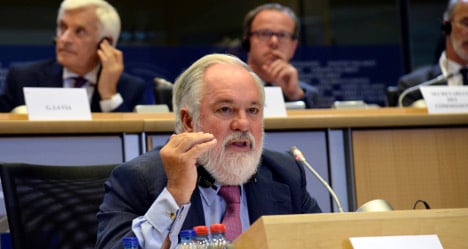 During the grilling, Cañete faced questions on Spain's record on renewable energy and fracking during his time as Spain's agriculture and environment minister. Photo: Thierry Charlier/AFP

Cañete will have to wait until Monday or Tuesday after a meeting to discuss his confirmation on Thursday proved inconclusive, Spain's conservative ABC newspaper reported.

The hearing saw him repeatedly forced to deny accusations of a conflict of interest after having sold his shares in two oil firms shortly after his nomination to the energy job in September, while his son resigned from the board of one company.

"Neither my wife nor my son nor I have any links to these firms," said the politician.

"The very day I knew I was being appointed the commissioner, I ordered the sale of the shares. From the outset I have said I have no conflict of interest," said Cañete, whose job is crucial at a time when the EU faces tensions with major gas supplier Russia.

However. Cañete repeatedly failed to respond to questions about the involvement of his brother-in-law Miguel Domecq in oil firms.

During the grilling, Cañete also faced questions on Spain's record on renewable energy and fracking during his time as Spain's agriculture and environment minister.

He responded by saying his priority was to see a Europe that leads the world in renewable energy and highlighted the importance of the fight against climate change.

At the same time, Cañete stressed the need to reduce Europe's dependence on gas from Russia.

Speaking in Spanish, French and English, the bearded Spaniard also apologized for alleged sexism after making macho comments towards a female rival at a debate in May. He said he had gone soft on his socialist rival because she was a "defenceless woman”.

"It was indeed an unfortunate comment and I apologize once again to you," he said.

Before Wednesday's hearing, more than 300,000 people, including 76 EU parliamentarians, had signed a petition against his appointment. There was also a "Stop Canete" protest by the Greens and the radical left outside parliament.

Cañete now faces an anxious wait to see if he is confirmed.

While experts say his confirmation is guaranteed because of a pact of non-aggression over his appointment which will see him confirmed by the left if the conservatives say yes to the French candidate for economic affairs commissioner Pierre Moscovici, the outcome remains uncertain.

"Socialists and Democrats asked for the postponement of the vote on commissioner designate Miguel Arias Canete ahead of a meeting between the spokespersons of all political groups in the energy and environment parliamentary committees tomorrow (Thursday) morning," the group said in a statement late on Wednesday night, quoted by the website EU observer.