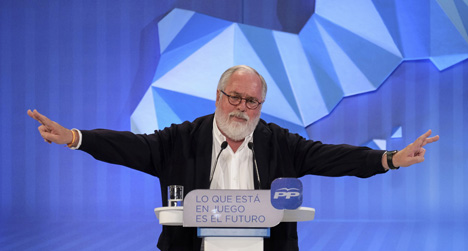 The #StopCañete campaign comes just as the Spanish conservative is expected to be grilled by hesitant MEPs on his confirmation hearing in Brussels on Wednesday. Photo: Pedro Armestre/AFP

At least 76 members of the European Parliament have signed a manifesto by left-wing Spanish parties calling for Cañete to be dumped from the Climate Action and Energy role.

The #StopCañete campaign comes just as the Spanish conservative politician is expected to be grilled by hesitant MEPs during his confirmation hearing in the European Parliament on Wednesday evening.

The former agriculture minister made headlines recently when he announced he would sell €320,000 ($414,000) worth of shares in two oil companies owned by his wife's family.

He claimed the move would avoid a "conflict of interests" given his new 'green' post but detractors remain convinced his background and persona are unsuitable for European policy making.

"We want to clearly manifest that his private links to the energy industry are completely incompatible with the position of Climate Action and Energy commissioner," reads the manifesto.

A flyer for the anti-Cañete event in Brussels on Wednesday

Spearheaded by Spanish left-wing parties such as Podemos (We Can) and Izquierda Unida (United Left), the campaign will also see critics protest against his appointment in a protest action to be held hours before his confirmation hearing in Place Luxemburg, close to the European Parliament.

More than 240,000 people have also signed a separate online petition calling for "petrolhead" Cañete to be dropped as the EU's Climate Action and Energy commissioner.

But the general consensus is that Cañete will be named as the new commissioner despite recent controversies.

"There is a pact between the various parties in the European Parliament and that should see Cañete get through his exam," Miguel Angel Benedicto, Professor of Political Science at Universidad Europea de Madrid told The Local.

"The position of the European Parliament is now also a relatively strong and stable after the election of Jean-Claude Juncker as the new European Commission president and no one wants to rock the boat," he added.

Cañete's detractors have voiced their discontent toward sexist comments made by Cañete last May,when he said he had gone soft on his socialist rival during a political debate because she was a "defenceless woman”.

But Benedicto said allegations of machismo would not be important on Wednesday evening.

At the same time recent actions by Cañete had also managed to "calm the waters" in terms of his connections with the oil industry, the political scientist explained.

A recent declaration of assets Spanish ministers had to provide the country’s Parliament with put the former agriculture head in second place in the political rich list, with wealth totalling €1.6 million.

The 64-year-old amended his declaration at the last minute to include an extra payment he received from his party the PP in a bid to avoid being caught out during Wednesday's three-hour hearing in Brussels.

"Cañete's decision to sell shares, and his revised assets declaration should mean this issue doesn't stand in the way of his candidacy," Benedicto said.

But he warned that any surprises that did come on Wednesday evening might come from green and ecological groups trying "to throw up barriers".

"Cañete can expect questions over Spain's new coastal law (which has reduced the protection belt for building along Spain's shoreline from 100 metres to 20 metres). As a former board member with the real estate firm Bami Newco, he stood to gain from the passing of the new legislation," Benedicto said.