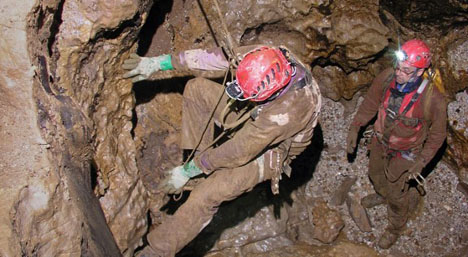 Cecilio Lopez, 40, was trapped nearly two weeks ago while exploring a cave in Chachapoyas in northeastern Peru.

A 50-person team of explorers descended more than two kilometers to reach Sanchez, who was evacuated on a stretcher after the complicated, hours-long mission from the Intimachay cave in the Andes' Leimebamba region.

A Peruvian air force helicopter airlifted the spelunker to the area's only airport in Chachapoyas.

The Madrid native was later moved to hospital in the Peruvian capital, Lima, where he is reported to be recovering well.

"The injured person is in stable condition, in good health and is being helped by several doctors," police chief Jorge Luis Calderon told AFP.

Sanchez, who suffered several spinal injuries, was greeted by cheering rescue workers when he emerged from the cave, according to local media.

The seasoned cave explorer belonged to a Spanish diving club, EspeleoKandil. He had several years of experience exploring caves in Peru where he studied ancient pre-Columbian civilizations.

Heavy rains, strong winds and cold temperatures complicated the rescue mission, which was conducted from 3,000 meters above sea level.

After the Spanish government claimed it could not afford to help out, a team of 47 Spanish cavers quickly set up an international rescue mission to help their colleague.

They made their way to the remote ravine in Leimebamba district, 605 kilometers (376 miles) northeast of the capital Lima, while also putting together a crowdfunding campaign to finance the rescue mission through online donations.

“The response has been fabulous, we received €50,000 ($63,000) so far,” Angel San Juan, president of Madrid’s Speleology Foundation, told Spanish sports’ daily AS on Sunday.