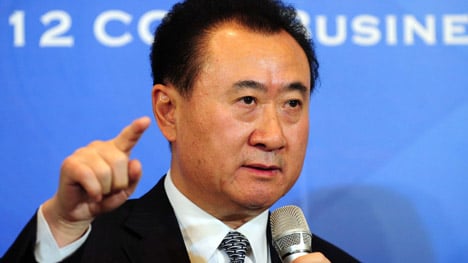 Wang, formerly a senior member of China's ruling Communist Party, was ranked the richest man in China and 26th richest in the world by Forbes. Photo: STR/AFP

Wang Jianlin, who bought a historic Madrid skyscraper for €265 million ($360M) in June, is now preparing to make another big investment in the Spanish capital, Ignacio González claims.

“We’ve been discussing for some time now the construction of a macro entertainment complex in Madrid,” the Spanish politician said in an interview on Spanish TV channel Telecinco on Wednesday.

“Nothing showcases our economic recovery better than foreign investment from Asia, the US and other parts of Europe.”

González, who didn’t disclose where the complex would be located or how many jobs would be created, told the panel of journalists that Madrid authorities would do everything possible “so that the problems we had with Eurovegas don’t occur again”.

The President of the Community of Madrid was referring to his right-wing government’s plans for a gambling-fuelled exit from the economic crisis, thwarted after the US group behind the mega-casino project in the Spanish capital decided to pull out in December 2013.

Las Vegas Sands was due to invest over $30 billion (€21.8 billion) in a mega-resort scheme similar to Wang Jialin’s, a project which promised 260,000 direct and indirect jobs for crisis-hit Spain.

The US casino operator stated Spain’s refusal to grant the mega-casino an exemption from the country’s indoor smoking ban as the main reason for scrapping their plans, along with their rejection of long-term tax concessions and the relaxation of employment regulations.

According to online Spanish daily Libre Mercado, Wang Jianlin is also planning to convert the Edificio España skycraper into a hotel and shopping centre.

Wang, formerly a senior member of China's ruling Communist Party, was ranked the richest man in China and 26th richest in the world, with personal wealth estimated at $14 billion, business magazine Forbes reported in February.