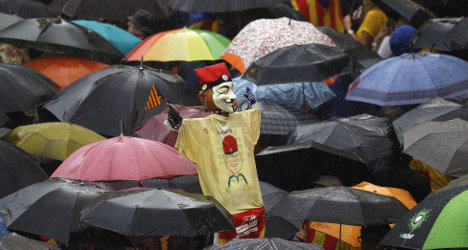 Angry separatists in the northeastern region demonstrated after a Madrid court halted the plan to hold the non-binding vote on November 9th, which the national government brands unconstitutional.

The speaker of the regional parliament, Nuria de Gispert, said the assembly would demand that the Constitutional Court "immediately lift" its suspension of the referendum.

Waving Catalan 'Estelada' independence flags of red and yellow stripes overlaid with a white star on a blue background, demonstrators rallied under umbrellas in Barcelona on Tuesday evening, yelling "We will vote".

Other carried signs reading "We will be free".

Catalonia's president Artur Mas on Saturday signed a decree calling the referendum. That was automatically suspended under Spain's constitution when the court accepted the appeal on Monday, pending its final ruling.

The regional government on Tuesday cautiously halted its publicity campaign for the vote so as not to oblige regional civil servants to break the court's ruling, but Catalan separatists vowed to push ahead regardless.

"Not rain nor snow nor any court will stop us," said Carme Forcadell, leader of the Catalan National Assembly, a powerful civil campaign group for independence, at the Barcelona rally.

"On November 9th we will vote and we will win."

Supporters of independence for the economically vital Spanish region called for demonstrations across Catalonia on Tuesday and Spanish media broadcast images of crowds in several other Catalan towns.

The Catalan government's spokesman Francesc Homs earlier told a news conference: "Nothing has ended and the government is determined to move forward. We can't give the signal that we have given up."

The protests saw clashes between police and members of the pro-independence CUP party when demonstrators attempted to camp outside the Spanish Government delegation in Barcelona to protest against the suspension of a planned referendum on independence.

Spain's conservative Prime Minister Mariano Rajoy said he "deeply" regretted Mas's move, saying it "divides Catalans, alienates them from Europe and the rest of Spain and seriously harms their welfare".

He said on Monday that the right to decide a region's status belonged to "all the Spanish people" under the country's 1978 constitution — the keystone of Spain's democracy after the death of the dictator Francisco Franco.

The main opposition Socialist Party has called for a "federal" reform of the constitution as an answer to demands for Catalan autonomy.

Rajoy said Tuesday he was open to proposals on constitutional reform but warned they were not his "priority".

Buoyed by mass street demonstrations and inspired by Scotland's independence referendum, Mas has pushed ahead for a vote in defiance of Rajoy's warnings.

"The future is something you conquer, not a gift, and we have to earn that," he said in an interview with Catalan television on Saturday.

Catalans are proud of their language and culture and many of the region's 7.5 million inhabitants feel they get a raw deal from the government in Madrid, which decides how their taxes are spent.

Catalonia formally adopted the status of a "nation" in 2006 but the Constitutional Court later overruled that claim.

Mas is under pressure from the pro-independence Catalan Republican Left (ERC), the left-leaning party that props up his Convergence and Union (CiU) grouping in parliament, to defy the court order.

Earlier this month, ERC leader Oriol Junqueras said that Catalans should consider civil disobedience, "just like Martin Luther King," if the central government denied them the chance to vote.

Mas has hinted that if the central government blocks the independence vote he could call an early regional election that would act as a plebiscite on the issue.