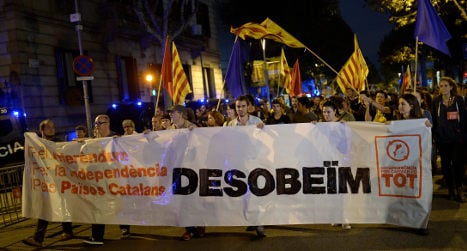 Pro-independence Catalans protest with a banner reading "Disobey" in front of a Spanish government delegation in Barcelona on Monday . Photo: Josep Lago/AFP

The unanimous and expected decision by the court's 12 judges came just hours after Spain's central government asked it to declare the non-binding independence referendum illegal on the grounds that it breaches the country's constitution.

The court said in a statement that it had accepted the appeal and had suspended the referendum while it considers the central government's arguments. The court had up to five months to give its ruling although it can request an extension.

The head of the regional government of Catalonia, Artur Mas, signed a decree on Saturday calling for the referendum.

Since then a luminous clock on Barcelona's historic Sant Jaume square has been ticking down the seconds to November 9th and television and radio stations in the region have aired ads informing the public of the vote.

Conservative Prime Minister Mariano Rajoy said he "deeply" regretted Mas's move, saying it "divides Catalans, alienates them from Europe and the rest of Spain and seriously harms their welfare".

In a televised address to the nation following an emergency cabinet meeting, Rajoy said the right to decide a region's status belonged to "all the Spanish people" under the country's 1978 constitution — the keystone of Spain's democracy after the death of the dictator Francisco Franco.

"There is nothing and no one, no power nor institution, that can break this principle of sole sovereignty," he added.

Buoyed by mass street demonstrations, Mas has pushed ahead for a vote in defiance of Rajoy's warnings.

"You cannot use the law to prevent people indefinitely from stating their opinion," Mas said in a television interview on Sunday in anticipation of Monday's appeal.

"Voting on November is the best thing for everyone because it will allow us and also the Spanish government to know what the Catalan people's opinion is."

Speaking to reporters on Monday in Barcelona, Mas criticized the "supersonic speed" of the Constitutional Court which met just hours after the
central government launched its appeal.

"They broke the speed of sound, they did not even wait one day," he said.

Supporters of independence have vowed to continue preparations.

Around 300 people protested outside in Barcelona on Monday evening, behind a banner reading "Disobey" in a demonstration organized by Catalonia's pro-independence CUP party.