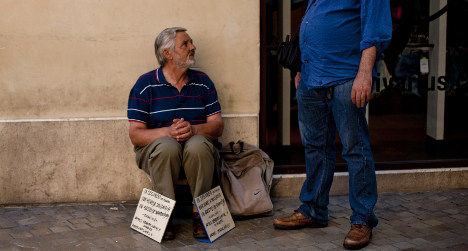 Former naval engineer Carmelo sits on the street begging for money to supplement his pension in a bid to survive economically in Malaga in June. File photo: Jorge Guerrero/AFP

But the figures from the charity's latest annual report don't necessarily represent an increase in hardship in Spain, where unemployment remains at a painful 24 percent.

Instead, Caritas, which provides a wide range of services, stressed it had been able to help more people because of the increased impact of private donations, and the higher number of new volunteers giving their time to Spaniards in need.

While the government's contribution to Caritas fell from just over €87 million ($110 million) in 2009 to around €73 million in 2013, private donations — which make up 75 percent of the charity's income stream — have continued to climb.

The "economic causes of inequality" had to be denounced said Caritas president Sebastián Mora on the release of the report on Monday, calling for a society where "heath, social justice, education, and housing are guaranteed for everyone.

He also called for the construction of an economy which put people first and didn't neglect the poorest. Everyone deserved a decent job, Mora added.

Caritas helped over 5 million people worldwide in 2013. That assistance included housing and food, help with job hunting, and aid for older people among others.