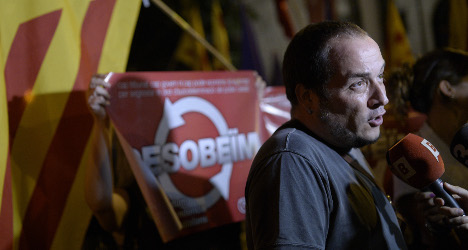 Pro-independence Catalans hope to pile pressure on Madrid with protests in favour of a November 9th vote on the issue of independence from the rest of Spain. File photo: Josep Lago/AFP

"We call everyone at 7pm tomorrow (Tuesday) in front of your town halls, let's start to build a new country. It's up to us," tweeted the pro-independence lobby on Wednesday.

The message came shortly after the 12 judges with Spain's Constitutional Court announced they would suspend Catalonia's vote on the issue of independence from the rest of Spain, after the country's central government in Madrid asked the court to declare the vote illegal.

Pro-independence campaigners vowed to push ahead with their plans for the November 9th vote.

In a taste of what is to come on Tuesday, some 300 people protested in Barcelona on Monday evening, behind a banner reading "Disobey" in a demonstration organized by Catalonia's pro-independence CUP party.

Tuesday nights protests organized by the ANC — the group which has organized mass events at the three most recent 'Diadas', or Catalan national days — will be held under the banner "Now is the time", as the group continues to pile pressure on Madrid.

"You cannot use the law to prevent people indefinitely from stating their opinion," Mas said in a television interview on Sunday in anticipation of Monday's appeal by the Constitutional Court.

"Voting on November is the best thing for everyone because it will allow us and also the Spanish government to know what the Catalan people's opinion is."