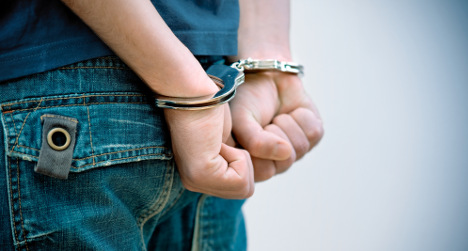 Photo of man in handcuffs: Shutterstock

Spanish Civil Guard officer Raul R.P. is behind bars awaiting trial for the alleged murder of his wife in the Madrid town of Aranjuez in March 2013.

The 33-year-old Guardia Civil, an officer of Spain’s military police, shot his wife in the head with his service weapon while she was sleeping and plotted to make it look like a suicide, national daily El Mundo reported.

Since Raul R.P. was imprisoned in June of last year, the four-year-old daughter he had with his wife has been living with her maternal grandparents.

A judge has now ruled it would be “recommendable” and “beneficial” for the child to receive a four-hour monthly visit from her jailed father at her new home in the company of the man’s parents and other supervisors, online daily 20 minutos reported.

The murdered woman’s parents have appealed the judge’s ruling, which was based on psychological tests suggesting the child would benefit from being able to talk to her father about school matters and play games together.