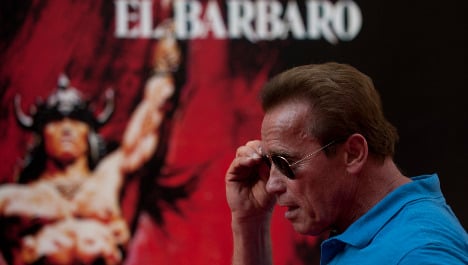 “I have many medals, trophies and prizes, but this is without a doubt…the most recent,” the former Governor of California joked moments after receiving the award at Madrid Town Hall on Friday.

Schwarzenegger is the first person to receive a Madrid Destino (Destination Madrid) medal, an award which will be granted to people and organizations helping to promote tourism in the Spanish capital.

The 67-year-old bodybuilding legend has organized four international fairs in Madrid dedicated to “culturismo”, as the muscle-building practice is called in Spanish.

“We chose the city because I love Spain and Madrid,” the seven-time Mr. Olympia champion told journalists and officials about the Arnie Classic Europe fair.

“Other cities such as Vienna, London, Paris and Berlin were fighting each other to hold it but we decided it was Madrid that deserved it.”

Even the presence of the newly-proclaimed ‘Ambassadator’ in the Spanish capital has resulted in “a considerable promotion and coverage of Madrid in international media sources”, town hall authorities said.

Arnie also spoke of his links to Madrid, where he filmed some scenes from his first big Hollywood hit Conan the Barbarian back in 1982.

“I spent five months shooting here. It was a wonderful period of my life and the film did a lot for my career.”

Schwarzenegger went on to spend the weekend in the other Spanish city where he shot the mythical action movie: Almería.

“You’re very smart,” he told the crowd as he explained he was about to choose the location of the Conan remake “The Legend of Conan”, suggesting the southern Spanish city was a strong contender.