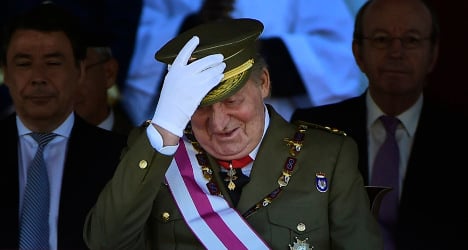 The pair hoisted an image of King Juan Carlos onto the facade of a building then set it alight. Photo: Pierre-Philippe Marcou/AFP

Guifre Peguera and Jordi Nogue  will go before a Barcelona judge on Thursday to answer a charge of lèse-majesté, or violating the dignity of a head of state, after they allegedly burned a photo of Juan Carlos during an independence rally on September 11th 2013.

Prosecutors say the pair burned the image of Juan Carlos, who abdicated in June 2014, during an unauthorized rally in favour of the independence of Catalonia organized by left-wing groups including the socialist organization Arran.

When participants at the 200-strong rally reached a cultural centre known as El Teler in Barcelona's Mataró district, the two men split up with the rest of the group and hoisted an image of the King Juan Carlos — who many Catalans view as the king of a foreign power — onto the facade of the building.

They then set fire to it using flammable liquid, Spain's 20 minutos newspaper reported.

Their act of rebellion could come with a hefty price tag though: prosecutors hope to see the pair slapped with a fine of €10,800 ($13,700) each.

This is not the first time Catalan protesters have come before a judge over burning photographs of members of the Spanish royal family. In 2007, two individuals were fined €2,700 each for burning images of King Juan Carlos and his wife Queen Sofia.