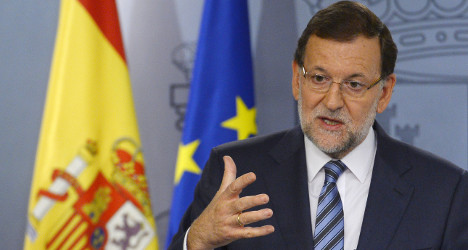 The meeting of the 12 judges will take place after  Spain's conservative central government on Monday announced it had lodged an appeal with the court against a law passed recently by the Catalan parliament allowing for the region's independence vote.

The government had also appealed a decree signed by the President of Catalonia on Saturday calling for that vote, Spanish Prime Minister  Mariano Rajoy said on Monday.

The announcement came after the President of Catalonia Artur Mas on Saturday signed a decree officially called the non-binding poll on whether the region should split from the rest of Spain.

Madrid has repeatedly labelled the unilateral vote illegal, arguing it is unconstitutional.

The Catalan vote is "clearly against our constitution which establishes that national sovereignty corresponds to everyone…and that no part (of the whole) can decide for everyone," said Rajoy after an extraordinary cabinet meeting on Monday morning held to look at legal measures to block the planned poll.

"We are obliged to appeal against (the Catalan independence vote) to defend the constitution."

"The vote is not compatible with the constitution either in terms of its subject matter nor procedurally," he said in a televised announcement.

Rajoy conceded laws could be changed but only though "democratic means" and with the "necessary support".

In lodging its appeal, the central government has the backing of the Spanish Council of State which on Sunday ruled Catalonia did not have the power to hold the vote.

If the appeal is accepted by the Constitutional Court, both the bill and the decree calling for the Catalan independence vote will be automatically suspended.  The court will then have five months to examine the matter, Catalan daily La Vanguardia reported.

The central government's announcement that of its appeal did not put off supporters of independence, who vowed to continue preparing for the vote regardless.

"We will not stand by idle after this suspension," said the spokesman for Mas's government, Francesc Homs, on Catalan television.

"We are committed to voting on November 9th,"  said Oriol Junqueras, leader of the left-wing Catalan nationalist party ERC, which is allied with Mas's conservative CiU grouping in the regional parliament.

"We are aware of the great difficulties we will face in the coming days but we are ready to face those difficulties."

Beyond the appeal to the Constitutional Court, the exact details of the government's plan of attack remain unclear, however.

According to Spanish daily El País, the government has not outlined how it will respond if the Catalan government continues to push ahead with a poll despite a legal roadblock from Madrid.

Legal experts consulted by the paper said in such an event, the poll results would be considered null and void. Opinions on whether the Catalan government would face legal punishment were mixed, with some experts arguing that scenario was unlikely.

But one former prosecutor with Catalonia's Supreme Court, José María Mena, said that once the bill allowing for the holding of the independence referendum had been suspended, anyone involved in promoting the referendum would be charged and punished.

Catalan President Mas, meanwhile, has said he is confident Spain's Constitutional Court will allow the November 9th vote to be held.