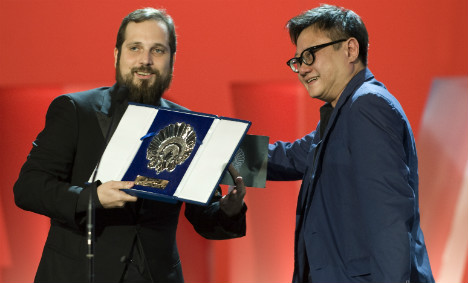 Vermut, 34, also took the best director prize for the movie, his second feature film, at a glittering ceremony in the northern Spanish seaside resort of San Sebastian late on Saturday.

"It is an honour and a privilege for us," he said as he collected the prizes at the ceremony.

Danish actress Paprika Steen was given the best actress award for her role as the daughter of a terminally-ill woman in "Silent Heart", directed by fellow Dane Bille August.

The movie had its world premier at the San Sebastian Film Festival, the oldest and most prestigious event of its kind in the Spanish-speaking world.

SEE ALSO: Top Ten: The Local's guide to the best Spanish films of all time

Spanish actor Javier Gutierrez won the best actor award for his interpretation of a policeman in thriller "Marshland" about the search for a serial killer.

The festival also presented special lifetime achievement awards to Oscar-winning US actor Denzel Washington and Benicio del Toro, who paid homage to his native Puerto Rico as he picked up the prize.

"I want to dedicate this award to the piece of land where I come from, where I was born, where I learned to throw rocks and had them first thrown at me," he said at the award ceremony.

The Donostia Award — the Basque name for the coastal city San Sebastian — has been given out each year at the festival since 1986 to "a great film personality in recognition for their work and career."