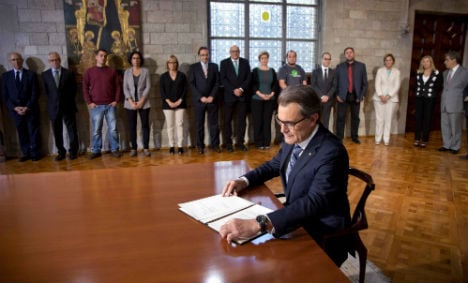 President of Catalonia's regional government Artur Mas checks a document during the signing of the regional law to vote on independence on November 9. Photo: Ruben Moreno Garcia/ Pool/ AFP

No one is "above the national will of all Spaniards," Deputy Prime Minister Soraya Saenz de Santamaria told a news conference shortly after Catalonia's president formally called the vote.

"This referendum will not take place because it is unconstitutional."

The government immediately began the process of appealing to the Constitutional Court, which is expected to annul the decree signed by Mas.

The independence movement in Catalonia has gathered strength in recent years.

Fired up ahead of the referendum in Scotland earlier this month, 1.8 million people protested in Barcelona on September 11 to be allowed to hold their own vote.

"Catalonia wants to express itself, it wants to be heard and it wants to vote," Mas said after he signed the decree calling the referendum in a ceremony at the Generalitat Palace in Barcelona.

The Spanish government's response was swift, with Saenz de Santamaria telling a news conference in Madrid: "This referendum will not take place because it is unconstitutional.

"We deeply regret the president's move and we consider it to be a mistake — it will cause Catalan society to fracture, it will divide the Catalans and distance them from Europe," she said.

Mas has vowed to let Catalans vote on breaking away but has also promised to respect Spanish law.

Catalonia is Spain's economic powerhouse, although it too suffered in the property crash and subsequent crisis unleashed by the 2008-2012 global financial turmoil.

Proud of their Catalan language and culture, many of the region's 7.5 million inhabitants feel short-changed by the government in Madrid, which redistributes their taxes.

Catalonia formally adopted the status of a "nation" in 2006 but the Constitutional Court threw out the attempt.

Prime Minister Mariano Rajoy has described a Catalan vote on independence as illegal and said he would fight to defend the unity of Spain.

Opposition Socialists said they supported the idea of allowing a vote but urged Catalonia to obey the law. "We are in favour of a reform to the constitution… but first, we must respect it," party spokesman Antonio Hernando said.

The government appeal to be lodged with the Constitutional Court will trigger a suspension of the referendum pending a final ruling from the judges.

Mas has hinted that if the government blocks the vote, he could call early regional elections in Catalonia which would effectively act as a plebiscite on the issue.

A group of pro-independence protesters who had gathered in front of the Generalitat, waving the independence banner, praised Mas's move.

Tanha Bueno, a 34-year-old civil servant, said: "What was until now just a dream is now within reach and I am filled with hope."

Josep Pena, 59, said: "The president must do what the people are demanding — build a new country.

"If the Spanish constitution won't allow it, then the problem is with the constitution," said Pena, a printer.

While the Scots voted by 55 percent to 45 percent to remain part of the United Kingdom, British Prime Minister David Cameron offered them increased autonomy if they rejected independence.

Hinting at his own ambitions, Mas said before the Scottish referendum that he was sure an independent Scotland would be swiftly re-admitted to the European Union.

But Rajoy described the independence ambitions of the Scottish National Party and Catalonia as a "torpedo" to European integration.

He has so far refused to give more decision-making powers to Catalonia.

Catalonia is also a popular tourist destination and home to the Barcelona football team of Lionel Messi, which is one of the world's richest sports clubs.