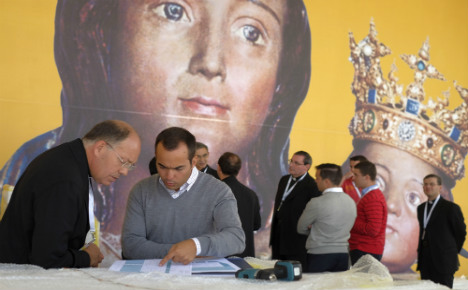 Tens of thousands gathered in the northeastern neighbourhood of Valdebeba for the beatification of Spanish bishop Alvaro del Portillo, who headed Opus Dei from 1975 until his death in 1994.

The Vatican recognised as a miracle the recovery of a Chilean baby, Jose Ignacio Ureta Wilson, from a long cardiac arrest and massive bleeding after his parents prayed for Del Portillo's intercession.

An accepted miracle is required for beatification, and another one for sainthood — except in the case of martyrs.

Now 11, the boy attended Saturday's beatification mass, which was co-celebrated by 17 cardinals and more than 150 bishops.

Meaning "Work of God" in Latin, Opus Dei teaches Catholics to strive for holiness through their work and ordinary lives and has some 90,000 members worldwide, of whom more than 30,000 are in Spain.

It became well-known through Dan Brown's novel "The Da Vinci Code", which portrays it as a secretive, power-hungry sect at the heart of the Catholic Church.

In real life, it runs universities, schools and benevolent projects around the world, including Spain's top-ranked IESE Business School.

Highly influential under the dictatorship of Spain's General Francisco Franco, Opus Dei is known for its conservative positions on social issues such as abortion, euthanasia and pre-marital sex.

But the group has been losing political influence in Madrid — and at the Vatican — as well as among followers, who are increasingly disenchanted by its demands for a strict daily routine of prayer, sacrifice and service