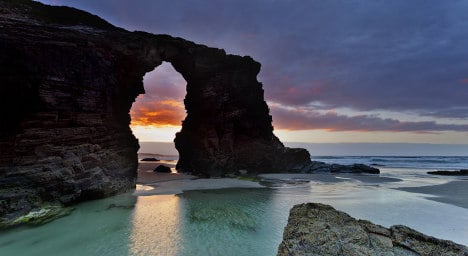 Praia as Catedrais leaves visitors in awe of its gigantic arch-like rock formations and deep caves. Photo of As Catedrais Beach: Shutterstock

Praia as Catedrais, which means Cathedrals Beach in Galician, leaves visitors in awe of its gigantic arch-like rock formations and deep caves.

Although it remains unknown to the many foreign visitors in Spain who rarely set foot in the rainier north of the country, As Catedrais is extremely popular among Spaniards, reaching a record 14,000 visits in just a few hours on August 13th.

According to national daily El País, the beach is showing the degrading effects of mass tourism (365,000 visits from July to September) more than ever.

This is despite the fact that Ribadeo authorities have already increased security, made more parking spaces available and clearly outlined the accessible areas from the restricted ones.

Galicia’s regional government has now decided to take a further step towards saving this natural wonder by limiting visitor numbers to between 2,000 and 5,000 a day, especially during holiday periods such as the summer or Easter week.

The stunning Cíes islands, just off the coast of Galicia, have also had their visitor numbers limited to 2,200 a day and tourists must take their rubbish with them as there are no bins in the archipelago.

In 2007, The Guardian named their Rodas beach the best in the world.