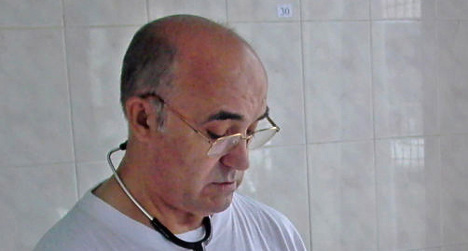 Manuel García Viejo was the second Spaniard known to have contracted Ebola in the current outbreak, which has killed nearly 3,000 people in west Africa. Photo: AFP/HO

Manuel García Viejo, 69, "died at 5:55 pm (1555 GMT)", a spokeswoman for Madrid's La Paz-Carlos III hospital, where he was being treated in isolation, told news agency AFP.

García, who ran a hospital in Sierra Leone, was the second Spaniard known to have contracted Ebola in the current outbreak, which has killed nearly 3,000 people in west Africa.

He was a member of the Hospital Order of San Juan de Dios, a Roman Catholic group that runs a charity working with Ebola victims.

The order said he had worked in Africa for 30 years and had been director of the hospital in the town of Lunsar in western Sierra Leone for the past 12 years.

The Spanish government sent a military plane that flew Garcia to Spain on Monday for urgent treatment at La Paz-Carlos III, a hospital specializing in infectious diseases.

In August a 75-year-old Spanish priest became the first European to die from Ebola in the current outbreak, the worst since the disease was discovered four decades ago.

That missionary, Miguel Pajares, also a member of the Order of San Juan, was infected in Liberia, where he worked with Ebola patients.

The Ebola epidemic has infected more than 6,200 people in west Africa and killed nearly half of them, according to the World Health Organization's latest figures.

No vaccine or medicine is currently available for treating Ebola. Pajares was treated with the experimental US drug ZMapp while in La Paz-Carlos III.