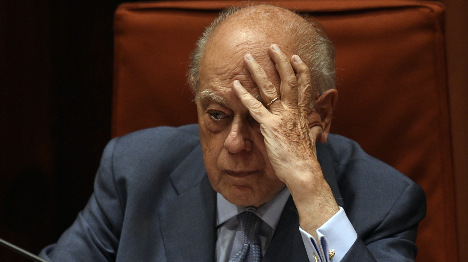 “I can say I was not a corrupt politician,” the 84-year-old told delegates in the Catalan regional assembly in the highly charged session.

“There was no corruption and no trading of favours,” added Pujol, who was Catalonia’s president from 1980 to 2003..

Pujol’s appearance on Friday came after he revealed in late July that his family had kept an undeclared inheritance from his father in overseas bank accounts for over 30 years. In a statement at the time, he apologized for the “mistake”.

That sum was the 140 million pesetas in 1980, Pujol said, explaining his father had taken the money abroad, fearing that his own decision to enter politics would one day mean he had to flee Spain.

“The existence of money in a foreign country can be criticized, heavily criticized, but that doesn’t mean the origin (of that money) is illegal,” said the man considered a founding father of modern Catalan nationalism.

This money did not come from “public funds,” he stressed.

“I didn’t go into politics for the money. I already had money. A 40 year old with money can dedicate himself to making more money, collecting art, buying property, I didn’t do any of that,” said Pujol.

He went on to say his project was about building Catalonia, “a project to which I dedicated my life and my resources.”

His revelation that his family secretly kept money abroad for over three decades comes as the Catalan government plans to hold a referendum on independence from Spain on November 9th, putting it at odds with the national government which insists such a move is illegal.

Pujol had previously asked the Catalan Parliament to postpone Friday’s appearance over his financial affairs to “divert as little attention as possible” from Catalonia’s September 11th national day and a vote in the regional parliament green-lighting the region’s independence vote.

The Spanish tax office has handed Pujol a formal notice calling on him to declare his assets.