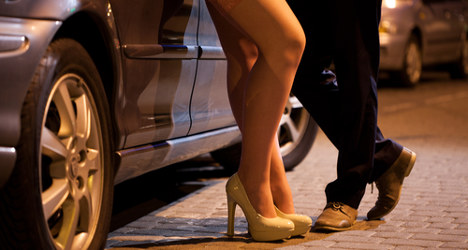 Photo of a man with a prostitute: Shutterstock

Spain on Thursday lifted its GDP figures for 2013 by €26.19 billion to €1.05 trillion, according to the national statistics agency, the INE.

Of that amount some €9 billion, or 0.87 percent of total GDP came from the inclusion of activities including drug trafficking, prostitution and illegal gambling into Spain's GDP.

Prostitution made up 0.35 percent of the new total while drug trafficking comprised 0.50 percent.

The remaining boost to GDP came from the contributions of research and development and military armament.

The changes to Spain's GDP are a result of new EU reporting requirements, meaning countries now have to provide details on what proportion of gross domestic product is based on activities as diverse as people smuggling, contraband cigarettes and prostitution.

The institute said it consulted "academic and scientific studies" and official reports and surveys to estimate income from illegal activities, in line with the standards set by the EU statistics body Eurostat.

Eurostat ordered countries to provide data on lucrative activities such as prostitution and drug-dealing on the grounds that they were a trade carried out willingly by participants.

Some countries rejected Eurostat's request. France refused to provide data on prostitution, arguing that it was not necessarily carried out willingly. Sweden, where paying for sex is a crime, also refused.

In Spain, "the government has no problem doing this, technical or otherwise," said an official in the economy ministry who asked not to be named.

"It is simply a matter of applying a decision by Eurostat, which was made to harmonize calculation methods" across EU countries, the official told AFP.

The Spanish tax-collectors' union Gestha contested the state statistics institute's method of estimating the income from illegal activities, however.

"These figures are a form of window-dressing that will enable the government to present better figures for the national deficit and debt," said Carlos Cruzado, Gestha's chairman.

Gestha has estimated that the black economy accounted for just under a quarter of Spanish GDP in 2012.

Italy on Monday published its own revised GDP figure, which rose by 3.8 percent when the new norms were applied.

Britain has estimated that counting illegal activities could add €12.3 billion to its production, just below one percent of its GDP for 2013.

Gestha has estimated that the black economy accounted for just under a quarter of Spanish GDP in 2012.

Spain emerged from recession in mid-2013. The government has said it is likely to raise its growth forecast to 1.5 percent for 2014 and two percent for next year.

After five years of crisis sparked by the bursting of a construction bubble in 2008, Spain's unemployment rate is still close to 25 percent.