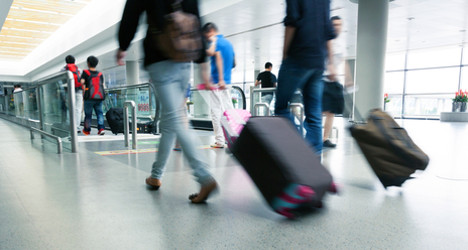 Photo of people at an airport: Shutterstock

Both the current rate of emigration of foreign residents from Spain and of Spaniards themselves could “have a significant effect on the potential growth of the Spanish economy”, said the bank in its September monthly bulletin.

“With the arrival of the crisis, the number of migrants working in the Spanish economy has changed radically,” said the report’s authors.

While the central bank recognized many of those people were foreign residents leaving the country, it said there was a growing trend towards Spaniards leaving to seek economic opportunities elsewhere.

This could seriously threaten Spain’s economy recovery, the central bank said, calling on Spain to step up efforts to bring down unemployment and make the country a more attractive place to work.

The September report also saw the central bank saying the country's economic growth could slow in the third quarter on the back of lower domestic demand.

"For domestic consumption, opinion polls and retail indicators are, on average in July and August, below the levels that were seen in the second quarter," the report said.

The report also said job creation had been slower in the third quarter to date than in the first half of the year.

Spain clocked up 0.6 percent growth in the second quarter of 2014, it's fastest growth in six years as the country slowly emerges from its long economic crisis.

Spanish Prime Minister Mariano Rajoy is currently in China selling Spain's recovery in a bid to drum up business.

He is expected to revise up 2014 growth forecasts for the country to 1.3 percent from 1.2 percent on Friday, lower than the original planned revision of 1.5 percent for the year, according to Spain's El Mundo newspaper.