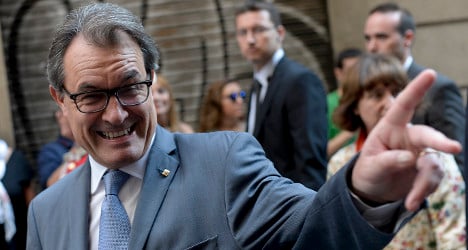 President of Catalonia Artur Mas at the festival of "La Merce" in Barcelona on Wednesday, marking the Catholic feast day of Our Lady of Mercy, patron saint of Barcelona. Photo: Josep Lago/AFP

Mas will sign the decree calling the controversial vote planned for November 9th on Saturday morning, sources within the Catalan government were quoted as saying by several major Spanish newspapers.

The exact time of the ceremony is yet to be determined but the signing could take place at around 10.30am, or while Spanish Prime Minister is on a plane returning from his current trip to China, regional daily La Vanguardia reported.

The Catalan leader wants the signing ceremony in the regional parliament building to be a show of support attended by pro-unity forces, party insiders have said.

The news could help end a week of intense speculation since Catalonia's regional parliament on Friday overwhelmingly approved a law green-lighting the key vote.

Following that move, the final stage in the process is for Mas to sign the official decree calling the poll.

His delay in doing so has led to speculation the regional government has been preparing a back up plan involving the calling of early elections.

Mas has previously suggested that if the central government blocks Catalonia's independence vote he would call early regional elections which would act as a plebiscite on the issue.

But government spokesperson Francesc Homs said on Tuesday there would be no early elections "on November 9th or after".

Spain's central government has branded the planned vote on independence illegal and has vowed to defend the unity of Spain. It said it will block the ballot by appealing to the Constitutional Court as soon as Mas signs the decree.

However, support for independence in the region of 7.5 million inhabitants is strong. Hundreds of thousands of people took to the streets of Barcelona on September 11th, Catalonia's national day, to demand a vote on independence.

Polls show that a majority of Catalans want the chance to have their say in a referendum, while support for independence hovers at around half the electorate.

But less than one quarter of all Catalans, 23 percent, believe the referendum should go ahead if the Constitutional Court declares it to be illegal, a Metroscopia poll published in daily newspaper El Pais on September 7th found.

The poll showed 45 percent of those surveyed believed Catalonia should respect the decision of the court while 25 percent said the region should look for other legal ways to redraw its relationship with Spain.

With an economy roughly the size of Portugal's, Catalonia — a region of 7.5 million or 16 percent of the Spanish population — has long been an economic powerhouse in a country where just under a quarter of people are unemployed.

But a growing number of Catalans resent the redistribution of their taxes by the central government in Madrid to other parts of Spain and believe the region would be better off on its own.

Proud of their distinct Catalan language and culture, Catalonia formally adopted the status of a "nation" in 2006 but Spain's Constitutional Court later overruled that claim.