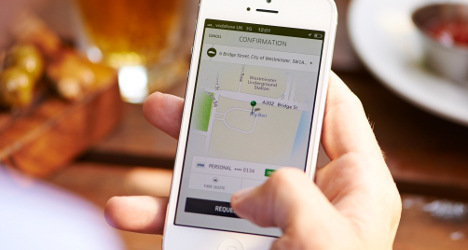 "The European Union tells countries like Spain to fight illegal economic activity but then allows the use of services of Uber. It doesn't make any sense," taxi driver Daniel told The Local. Photo: Ube

After launching in Barcelona in April, taxi app Uber, which links passengers with drivers of private vehicles, kicked off its operations in Madrid on Tuesday.

While Uber has not provided details of how many drivers have signed up with the company in Madrid, it is promising customers they will receive a ride within five minutes.

"We are happy to be able to launch uberPOP in Madrid. UberPOP offers people in Madrid an easy, flexible and affordable alternative to move around the city safely," a spokesperson for the company said on Tuesday.

But it remains to be seen how the service will be greeted in by authorities in Madrid.

Barcelona in June banned the use of the application, saying it would fine drivers as much as €6,000, and Madrid taxi drivers on Tuesday told The Local, they hoped the Spanish capital would take the same action.

"The European Union tells countries like Spain to fight illegal economic activity but then allows the use of services of Uber. It doesn't make any sense," taxi driver Daniel told The Local.

"We pay taxes but Uber drivers don't," he added.

"All taxis in Madrid are licensed by the town hall and we all have a licence," his colleague Manuel explained.

"On top of that our vehicles have to be inspected every six months, and we pay large insurance premiums. But Uber drivers don't have to meet those conditions. People say companies like Uber promote the free market, but there is nothing free about it."

"Madrid must ban Uber as was the case in Barcelona," the taxi driver concluded.

The status of the app across Europe remains unclear with individual countries and regions scrabbling to create a legal framework.

A court in Frankfurt recently overturned a German ban on the service, although judges noted they still had reservations about the company's business model.

"We believe that there’s room for everyone, and we’re improving transport options for both riders and drivers alike," a spokesperson for Uber in Spain recently told The Local, adding that the company complied with all local laws where it operated.