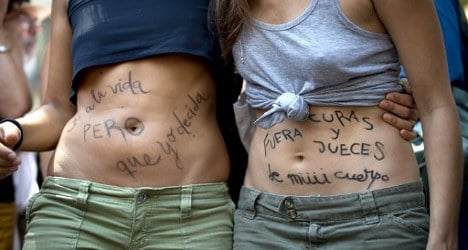 The controversial draft bill angered thousands of pro-choicers who took to the streets to voice their discontent.Photo: Dani Pozo/AFP

The draft reform, approved in January, would have allowed abortions only in cases of rape which had been reported to the police or when there was a medically-certified threat to the mother's physical or psychological health.

Current legislation will now be revamped to ensure that 16 and 17-year-olds have to obtain parental permission before having an abortion, meaning that the most controversial aspects of the planned reforms will fall by the wayside.

"We are very happy with the decision, and we should all be celebrating," Rosa Escapa, the president of Spanish women's lobby group Celem told The Local.

"It shows that Spain has changed a lot in the last 30 years, and that it was it is worth the effort to fight the proposed reforms."

Escapa said the decision to discard the law hadn't taken Celem completely by surprise, given the "suspicious" series of delays to the passing of the legislation in parliament.

But the CELEM president also pointed out that the government itself had probably been taken aback by the level of opposition to the plans.

"That opposition came from men and women, and from old people and young people, and I think that had to do with the fact that the abortion reforms had nothing to do with the crisis.

"Until now, the government has used the economic crisis and the lack of funds as an excuse to push through cuts to education and health," said Escapa.

"But the abortion reform was an attack on individual rights and was more ideological than anything else."

The discarded draft bill caused divisions within Spain's ruling conservative Popular Party and angered thousands of pro-choicers who took to the streets to voice their discontent.

Spain's main opposition party, the Socialist PSOE, reacted to Tuesday's news by calling it a "triumph of reason".

The government's official announcement of plans to shelve the reforms comes shortly after centre-right daily El Mundo reported that Rajoy had allegedly changed his mind, quoting sources from within the government.

"There’s no consensus regarding this bill, it’s looking unlikely that it will be approved," Popular Party sources purportedly told the daily.

Under current Spanish legislation brought in by the previous Socialist government in 2010, women in Spain have the right to abortion on demand up to 14 weeks into their pregnancy.

Women also have the legal right to abort up to the 22nd week of pregnancy in cases where the mother's health is at risk or the foetus shows serious deformities.

"In this regard, possible changes that would see young women having to inform their parents could be a step backward. It assumes these people are well-informed about the issues, which is not always the case," she explained.

"Some young women might also be forced to either terminate their pregnancy or bear a child they don't want," she added.

The Celem president also made a call for better sex education in Spain's schools, especially when it came to preventing unwanted pregnancies.

Spanish Justice Minister Alberto Ruiz-Gallardón resigned following his government’s decision to shelve a draft law he had spearheaded. He said he would give up his seat and leave politics altogether.