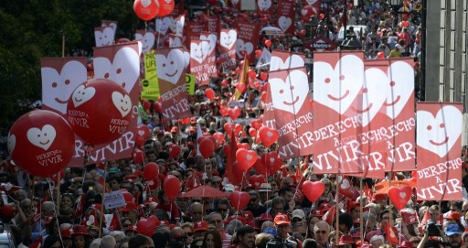 Spanish daily El Mundo recently reported the plan was unlikely to ever make it into law because of divisions inside the government. Photo: Gerard Julien/AFP

"Yes to life, no to abortion", shouted demonstrators of all ages as they marched through the centre of Spain's capital, while others yelled: "If they kill, don't vote for them."

"I voted for them and they betrayed me," said demonstrator Iciar Gereca, 41, as she marched with the crowds carrying balloons and banners emblazoned with the slogan "Right to Life".

"Why are they holding back now? To win votes? It doesn't make sense."

Spain's ruling conservative Popular Party in December proposed legislation that would make abortion illegal except in cases of rape, or when the pregnancy threatens the health of the mother.

But nine months later the law, which would be one of the toughest in Europe, has not yet been approved by parliament after facing stiff opposition in Spain as well as from abroad.

Spanish daily El Mundo recently reported the plan was unlikely to ever make it into law because of divisions inside the government.

Rumours that its author, Justice Minister Alberto Gallardon, is set to resign have also been rife in Spanish media.

"The government wants to work to achieve the broadest possible consensus."

Maria Arevalo, 17, who attended Sunday's march with two friends, said the government has backtracked on its pledge because of fears it would be punished in municipal and regional elections next year.

"The municipal elections are not far away and the government is afraid of losing popularity," she said.