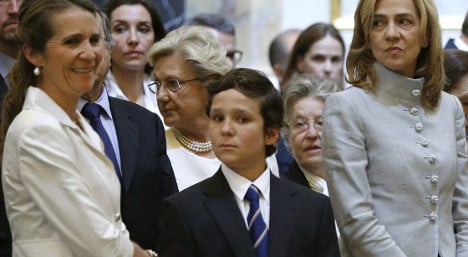 Froilán made national headlines in 2012 when at just 14 he shot himself in the foot (literally) while out hunting with his father. Photo: Juan Carlos Hidalgo/AFP

Sixteen-year-old Felipe Juan Froilán de Marichalar y Borbón, known to most Spaniards simply as Froilán, has built up a reputation for himself as the ‘Prince Harry’ of the Spanish royal family.

According to national daily El Mundo, his mother Princess Elena (King Felipe's older sister) forced him to spend most of the summer studying for make-up exams in September in the hope that the teen royal wouldn’t have to sit his final exams for a third time.

Despite the €1,500 ($1,900) investment made by his parents, Froilán failed yet again and has since been kicked out of his school as the institution’s policy states that no student can stay after failing their end-of-year exams twice.

And so Spain’s rebel royal – described by his teachers as having "a big heart" but behaving "like a rascal in class" – is now likely to be enrolled in an exclusive boarding school in Sussex, South East England.

Froilán made national headlines in 2012 when at just 14 he shot himself in the foot (literally) while out hunting with his father Jaime de Marichalar.

The accident, as well as his parents’ divorce in 2009, are usually regarded as the main reasons for his difficulties in “enduring school discipline”.

Froilán has also been stopped from working as a PR man for a famous Madrid nightclub which employed him without pay to attract a bigger crowd to their under-18 alcohol-free dos.