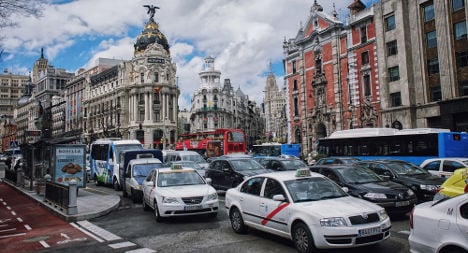 From January 2015, Madrid’s central neighbourhoods of Sol, Palacio, Cortes and Embajadores will probably no longer be accessible by car unless the people at the wheel are residents or wish to leave their car in one the 13 car parks found within the 352-hectare (860-acre) 'cordoned-off' area.

Spearheaded by Madrid’s former mayor and current Justice Minister Alberto Ruiz-Gallardón, the new measures are likely to cost €500,000 ($640,000) a year but will potentially reduce traffic congestion by a third in the narrow streets of the capital’s Centro district.

"The main objective is to reduce the number of drivers looking for parking spaces in these busy neighbourhoods whilst also offering more spots to residents," Madrid town hall representatives have said.

Spanish national daily El País reported the news on Sunday, pointing out that if drivers are unable to find a place to park in the 13 underground car parks because they are full, their registration numbers will still be recorded by one of 22 security cameras watching over the exits.

If drivers decide to leave the area, authorities will then send a €90 fine to their home address.

Motorbikes will have free access from 7am to 10 at night while delivery vans will only be able to enter the zone from 10am to midday on working days.

Madrid’s controversial mayor Ana Botella, who announced on September 10th she will not be running for 2015’s municipal elections, has plans to extend the restrictive measures to the city’s hip neighbourhoods of Malasaña and Chueca before her mandate ends.

The congestion charges form part of a Mobility Plan (Plan de Movilidad) approved before the summer which also includes higher parking meter rates and a 25 percent increase in pedestrian zones in the city centre.

There are currently 1.7 million vehicles in Spain’s capital, 80 percent of which are cars, even though there are already congestion restrictions in place in the city.

In Madrid's centre the average driving speed is only 21km/h and there is a 6 percent chance of being stuck in a serious traffic jam.

Noise and air pollution in Madrid still fall short of the levels set by the EU and official health bodies.