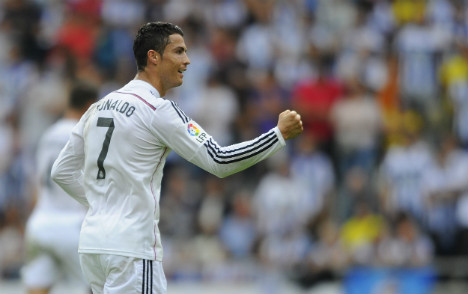 "We showed the quality we have. We have a phenomenon in Ronaldo and we have other players with great quality," said Ancelotti.

"They combined very well together and that was the best thing we can take from the game."

Ancelotti's men were under pressure to return to winningways in La Liga after two consecutive defeats to Real Sociedad and Atletico Madrid that had left them six points adrift of leaders Barcelona after just three games.

Real had responded with a 5-1 thrashing of Basel to open their Champions League campaign in midweek.

However, despite their free-scoring form, Ancelotti insisted finding the right balance between defence and attack remains his primary objective as they have now conceded seven times in their last three league outings.

"The season is very long and recovering points on the leaders just now isn't the problem."

"We have to improve. Today we showed the quality everyone knows we have which is the capability to score in many different ways.

"We need to continue improving the balance and our consistency. After two defeats we have scored 13 goals and that is a good sign that we have responded well."

After Ronaldo had opened the scoring, James Rodriguez doubled Real's advantage with a sumptuous left-footed strike before Ronaldo made it 3-0.

Hernandez has had to play a supporting role to Karim Benzema in his short spell in Madrid so far, but insists he will continue fighting for a place in
Ancelotti's starting line-up.

"I have never been happy to settle. I you give me a minute I will want two and then three," said the Mexican international.

"The time that I am on the field I am going to take advantage of and show that I want more.

"I have to work as hard as possible and with humility. I never set goalscoring targets because the goals are a product of the work of my teammates. The most important thing is that Real Madrid won."