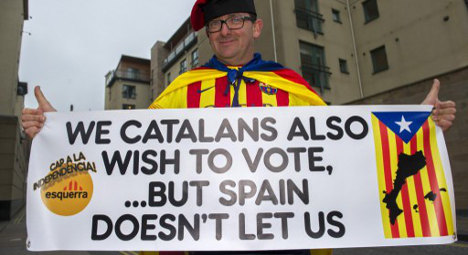 A Catalan supporter of the 'Yes' campaign holds up a banner outside the Scottish Parliament in Edinburgh. Photo: Lesley Martin/AFP

Nationalists in the northeastern Catalonia region keenly watched the result from Scotland, knowing a "Yes" result there would fire up their own campaign to hold a vote — a move fiercely opposed by Spain's central government.

"We are very happy that Scotland is staying with us," Spain's Prime Minister Mariano Rajoy said, hailing the result as positive for "the integration of the European Union".

But in Catalonia, supporters of independence were undaunted. Leaders there have pushed ahead this week with their vote plans regardless of the result in Scotland.

"Of course we hoped that Scotland would vote 'Yes' and that would catch on to Catalonia, but the point is that they have been able to vote and we have not," said Josep Maria Garrell, a 55-year-old baker in Arenys de Munt, north of Barcelona.

In 2009 his town became the first Catalan village to stage a symbolic vote on independence.

Catalonia's regional parliament was due on Friday to pass a new electoral law that its leaders say will authorise them to hold a non-binding "consultation" on independence.

The region's president Artur Mas then plans to sign a decree formally calling the vote for November 9.

Spain's national government has vowed to block those steps by appealing to the Constitutional Court.

Rajoy has branded the planned vote illegal and vowed to defend the unity of Spain.

Supporters of independence for Catalonia were inspired by the referendum in Scotland, but complained that whereas the British government approved those polls, Madrid was denying Catalans a similar vote.

Britain's Prime Minister David Cameron, despite opposing independence, has promised more powers over tax, spending and welfare to Scotland's devolved government — and in the wake of the referendum result, extended that offer to the rest of the United Kingdom.

"Scotland has voted and will achieve more autonomy, whereas we are not even being allowed to vote," said Joan Rabasseda, the mayor of Arenys de Munt.

"I would have liked the 'Yes' vote to win in Scotland in order to open up a debate at a European level. We will have to hope that debate opens up at least in Catalonia."

The "No" vote was one less headache for Rajoy as he resists Mas's campaign while working to consolidate Spain's recovery from recession.

Scots "have chosen between segregation and integration, between isolation and openness, between stability and uncertainty", Rajoy said in a recorded video message on Friday.

Mas was due to speak publicly early on Friday afternoon.

"In a democracy, taking a decision to stay united is good news," he told the radio station COPE.

"The consultation vote aiming at independence in Catalonia is illegal. What we propose instead is a reform of the constitution," Sanchez added.

"If Rajoy was brave, that's what he would propose."

At the height of Spain's economic crisis in 2012, Rajoy rejected Mas's demand to give Catalonia more power to tax and spend.

"Perhaps after the 'No' vote in Scotland, those in Madrid will realise that it is better to talk and look to agree on a solution," said Garrell, the baker in Arenys de Munt.

"If they block the consultation vote, they will make thousands more people want independence."