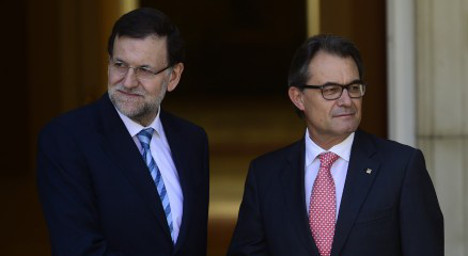 Artur Mas will not call the November 9th referendum on self-rule immediately after the “consultation” bill is passed. Photo: Pierre Philippe Marcou/AFP

Although Catalan daily La Vanguardia has reported that Catalan president Artur Mas will not call the November 9th referendum on self-rule immediately after the “consultation” bill is passed, Madrid wants to have its appeal for the State Council and Constitutional Court ready as soon as possible.

With this document, Spain’s ruling right-wing Popular Party hopes to strengthen its position vis-à-vis what it considers an attack on the country’s constitution.

On the other hand, Artur Mas hopes the "consultation" bill expected to be passed by landslide in the Catalan parliament on Friday will make the November vote legal in the face of very strong opposition by the PP.

"Everyone in Europe thinks that these processes are hugely negative, financially and economically," Spanish PM Mariano Rajoy told the Spanish parliament on Wednesday with regard to Scotland and Catalonia’s independence bids.

Now that Scottish voters decisively voted to stay in the United Kingdom, the uncertainty over when Artus Mas will take his next step to Catalonia’s independence referendum has been magnified.

“Today we approve the law, then we go over it and correct it, once it’s published the law comes into force and the President (Artur Mas) can sign the decree for the referendum,” Catalan parliamentary secretary Josep Rull told Spanish radio station RNE.

Even though Mas has assured pro-separatist Catalans that the vote will be held, he has also hinted that the referendum may be cancelled if it doesn’t have the “full democratic guarantees” of Spain’s Constitutional Court.

More radical Catalan politicians such as Oriol Junqueras have invoked Martin Luther King's philosophy of civil disobedience if the Spanish government vetoes the referendum on secession.