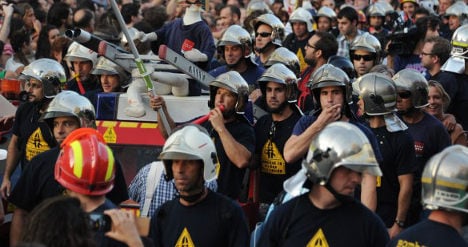 After a 2,000-kilometre drive from Catalonia, the firefighters were greeted by a crowd of "Yes" supporters in the city's George Square on the eve of the vote. File Photo: Dominique

After a 2,000-kilometre (1,243 miles) drive from their homeland, the firefighters were greeted by a crowd of "Yes" supporters in the city's George Square on the eve of the vote.

"We've come to help the Scots and to tell the world that we Catalans want to vote," said Pep Pladeveya from Gerona in northeast Spain, standing by his brightly-coloured Seat 600.

"We live in a dictatorship and we want to vote like in Scotland," he told AFP in the square.

Pladeveya said he and his friends would stay in the square and lay out candles to make the Scottish and Catalan.

Hundreds of thousands of Catalans fired up by Scotland's referendum rallied last week in Barcelona's streets in red and yellow shirts, forming a giant "V" to demand a vote.

Spanish Prime Minister Mariano Rajoy on Wednesday branded moves for independence such as those in Scotland and Catalonia a "torpedo" to European integration.