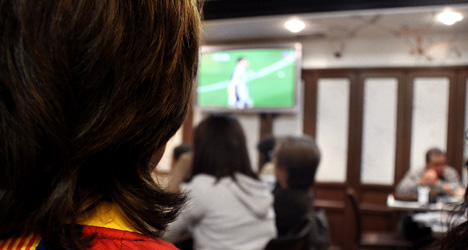 The number of people using mobile devices has surged but TV remains the preferred medium for watching sport in Spain. Photo: Flickr/Iñaki Pérez

The Informe Global 2014 report was commissioned to reveal the consumer habits of sports fans around the world. It looked at 16 countries, including the UK, USA, Germany, France, Brazil and China.

Spanish people were found to spend a whopping 10.1 hours each week, the equivalent of 90 minutes a day, watching or reading about sport. French and German people spent less than 50 minutes a day on average.

Spain's weekly average was almost double that of the previous survey in 2011 (5.9 hours). The increase has been attributed to the increased use of mobile phones and tablets.

21 million Spaniards now use the internet to watch or read about sports, with 15 million mobile device users compared to just 6.5 million in 2011.

Television is still the preferred medium for Spanish sports fans (2.75 hours a week) but fewer people subscribe to pay-per-view sports channels now (21 per cent) than 3 years ago (31 per cent).

Many Spaniards also now double-up and use mobile technology at the same time as they watch sport on TV. Activities recorded in the survey included checking the real-time results of rival teams (59 per cent), placing bets, and even watching another game (35 per cent).

According to Spanish daily 20 Minutos, 82 per cent of Spaniards proactively keep up to date with sports results, compared with 73 per cent of British people and 65 per cent of French people.

Around 32 million Spaniards follow sports, with no real class, gender or age differences. The most popular sports are football (62 per cent), Formula 1 (45 per cent), basketball (36 per cent) and MotoGP (33 per cent).