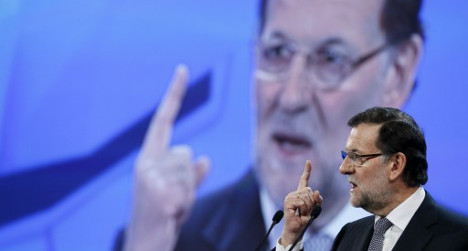 The conservative premier's comments sharpened the political tone in a potentially crucial week for the Catalan independence movement, just a day before Scotland votes on whether to break from Britain.

"Everyone in Europe thinks that these processes are hugely negative," financially and economically, Rajoy told the Spanish parliament.

"These processes are a torpedo to the waterline of the European spirit, because Europe has been built to integrate states, not to fragment them," he added.

Scotland's referendum on Thursday, approved by the British government, has fired up nationalists in Catalonia, a northeastern region of Spain with a distinct language and culture.

Catalans want to seize full political and economic control of their region from Madrid. Catalonia is the richest part of Spain but has suffered in the economic crisis that broke out in 2008.

On Friday the Catalonia regional parliament is scheduled to approve a new law that is says will allow a "consultation" vote on November 9 to ask Catalans whether they want independence.

Rajoy has described such a vote as illegal and vowed to block it to defend the unity of Spain.

The new Catalan law is expected to be annulled by Spain's Constitutional Court. Catalonia's president Artur Mas has vowed to push ahead with a "consultation" but only by legal means.

Mas has hinted at a possible snap election in the region if Catalans are prevented from voting.

He told the regional parliament on Monday that he "would like to finish" his current four-year term as president, but that would only be possible if Catalonia "can vote on November 9 with full democratic guarantees".