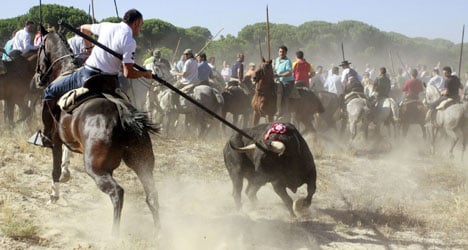 The ritual killing, which has taken place since the 15th century, is considered a "cultural tradition" by the EU but condemned as "sadistic torture" by opponents. Photo: CESAR MANSO / AFP

The festival in the town of Torsedillas has become the focus of international condemnation in recent years for its "bull versus town" Toro de la Vega festival.

Held since medieval times, the event sees 45 registered, lance-wielding participants chasing a 600-kilo (1322lb) beast through the streets and fields of Tordesillas.

Town hall sources estimated that 40,000 visitors came to witness this year's bloody spectacle. The bull, named 'Elegido' (The Chosen One) was pursued and speared by people on foot and on horseback for half an hour. Once mortally wounded it was stabbed three times and killed by a single man, 28-year old Álvaro Martín.

Four people were reported as injured, two of whom were gored by the bull. One woman was hit by a stone and the other suffered an anxiety attack, according to the Red Cross. A 42-year-old man was taken to nearby Valladolid hospital and was reported to be in a 'serious' condition.

200 protesters tried to stop the killing. Some of them attempted to prevent the bull from entering the town but they were arrested by 120 Civil Guard officers. Others chained themselves to the bridge at Torsedillas and were also removed by police.

Stones were thrown in clashes between protesters and supporters of the event and a fire was started, leading to one arrest according to Spanish daily La Vanguardia.

The EU refused on Tuesday to comment on the festival because it was considered a "cultural tradition" which it considers to be the exclusive responsibility of member states.

Last year the Spanish parliament debated whether to abolish the event after an 85,000-signature petition was presented by animal rights group PACMA and tens to fifteen thousand people gathered in the streets of Madrid last year to demonstrate, but no decision was taken.

United Left politician Laia Ortiz described Toro de la Vega at the time as "one of the biggest acts of brutality in Spain. A slow torture for sadistic pleasure."

This year 100 leading academics sent a joint letter to the government to demand the prohibition of the event.