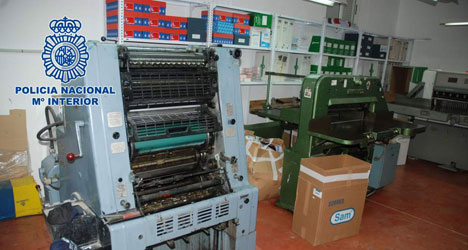 The arrests were made in eight raids across  Elche (Alicante), Madrid and Barcelona at the conclusion of a two-year 'mega-fraud' investigation by the national police force.

Police seized €46,000 in cash, three cars and a motorcycle, plus IT equipment including 7 servers. 32 of the people arrested have had their assets and bank accounts frozen.

Officers discovered a fraud that had been "planned, developed and perfected" over 14 years, according to a statement on Wednesday.

The scam involved offering freelancers and workers at small companies the chance to place adverts in police-themed magazines, both in print and on-line, usually at a cost of less than €400.

Victims were told that the publications would be distributed in police stations and other official institutions.

But the magazines were cheap, poorly printed copies of official magazines that were only ever sent to the victims themselves.

The fraudsters were said to have used hard-sell telemarketing techniques to persuade people to part with their cash.

They passed themselves off as police officers and representatives of the force to coerce their 'customers'.

Many of those targeted were elderly or experiencing financial difficulties.

Police found it difficult to pin down the scammers, who disguised their activities behind an ever-changing sequence of 60 shell companies and 31 websites.