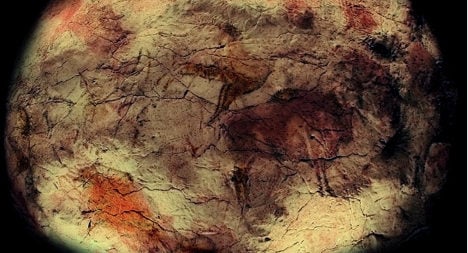 Experts weren't sure the paintings could withstand the breath and germs of visitors. Handout photo: Museo Arqueológico Nacional de España

Experts who launched small trial viewings in February at the Altamira cave to see whether the ancient paintings could withstand the breath and germs of visitors have now decided to extend them, the culture ministry said.

Renowned for its 14,000-year-old paintings of red bison, the cave closed in 2002 for fear that moisture and microscopic fungi introduced by visitors would ruin the prehistoric paint.

This year's trial visits of small groups showed "no relation of cause and effect between the presence of researchers and visitors… and the loss of pigment", the ministry said in a statement.

Experts have now decided to continue letting five visitors per week into the cave until next February in order to monitor the effect on the ancient masterpieces over a year, it said.

The highlight of the cave is a set of paintings, at least 14,000 years old, of red and yellow bison plus horses, deer, humans with the heads of animals and mysterious symbols.

UNESCO listed the paintings as a World Heritage Site in 1985, describing them as "masterpieces of creative genius and… humanity's earliest accomplished art".

The cave was discovered in 1868 at Santillana del Mar in Spain's northern Cantabria region.

During the closure, visitors have had to make do with replicas of the paintings, with only scientists allowed into the cave to carry out research.