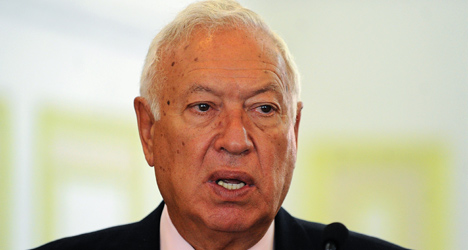 Margallo also gave his opinion that a 'yes' vote in Thursday's Scottish independence referendum would lead to a "Balkanization" of Europe. Photo: ISHARA S.KODIKARA / AFP

Margallo was asked questions at a press junket on Tuesday about the public vote on independence planned in Catalonia for November 9th.

He vowed to use "only the law, but all the law" to stop the vote going ahead.

Asked if that included the possibility of stripping Catalonia of its powers of autonomy,  he responded, "Including what has to be included to make sure this consultation does not happen."

With an economy roughly the size of Portugal's, Catalonia, a region of 7.5 million — 16 percent of the Spanish population — has long been an economic powerhouse.

Proud of their distinct language and culture, a growing number of Catalans resent the redistribution of their taxes to other parts of Spain and believe the region would be better off on its own.

Spanish Prime Minister Mariano Rajoy refuses to countenance a break-up of Spain and his government has warned it would appeal to the Constitutional Court to prevent a referendum.

Article 155 of Spain's constitution gives the government the power to use "all means necessary" to force autonomous regions which 'act against the general interest of Spain' to come into line and  'comply with their constitutional obligations', according to Spanish daily 20 Minutos.

Margallo's words outraged Catalan MPs and Basque Nationalist Party (PNV) politician Aitor Esteban who responded "Sending in the tanks too? Everything that has to be included!"

Margallo replied, "That doesn't seem to be in the constitution."

Esteban later described Margallo's words as sounding "very serious" and added that "the most worrying thing is that they don't want to open the doors to democracy and to the free expression of the will of the people."

Margallo also said that the seccession of Catalonia would be "a bad precedent" for both Spain and other EU countries.

He added that a 'Yes' vote to independence in the Scottish referendum, due to take place on Thursday, would be "bad" for Scotland, the United Kingdom and the European Union.

It would, he said, lead to a "Balkanization" that would run contrary to the integrationist process  of the EU.

When asked about Spain's position on the possibility of an independent Spain asking to join the EU, Margallo said, "We'll see when the time comes," but he has vowed on a number of occasions that Spain would veto Scotland's membership.