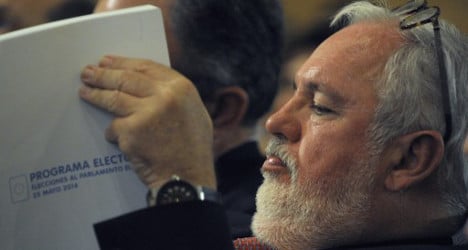 The total value of Cañete's oil shares stands at €320,000, an asset declaration report he presented in the Spanish Parliament suggests. Photo: Miguel Riopa/AFP

The news was met by criticism from Spain’s opposition socialist PSOE party, their leader Pedro Sánchez arguing Cañete had ignored his ecological policy when serving as the country’s agriculture minister.

"You cannot put energy policy in the hands of someone who has personal interests and investments in the (energy) sector, the fox to guard the henhouse," Green MEP Ernest Urtasun added.

In the face of all this criticism, members of the PP have told Spanish national daily El Mundo that Cañete has decided to sell all his shares in Ducar and Petrologis, two Spain-based oil companies founded by his wife’s family.

According to an asset declaration report presented by Cañete in the Spanish Parliament, the total value of his oil shares stands at €320,000.

“I hope he has actually sold the shares and not just passed them on to his father, son or cousin because we know how that story goes already,” German MEP Rebecca Harms told El Mundo.

The leader of The Greens-European Free Alliance is one of several MEPs expected to grill Cañete when he addresses the European Parliament in the coming weeks given the global criticism he received last May when he said he had gone soft on his socialist rival during a political debate because she was a "defenceless woman”.