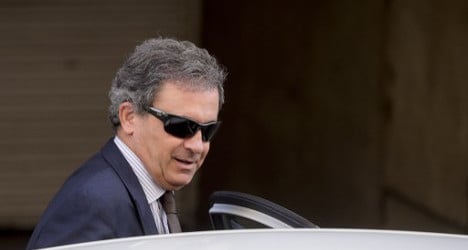 Jordi Pujol Ferrusola, the oldest son of Jordi Pujol who headed the regional government of Catalonia from 1980 to 2003, is suspected of collecting millions of euros by winning bids on government contracts and hiding the money in foreign bank accounts.

Police opened their investigation after a former girlfriend in December 2012 accused him of regularly transporting bags of cash to Andorra, a tiny principality with borders abutting France and Spain.

In July Pujol Ferrusola's father sent shockwaves through Catalan political circles when he announced in a statement that he had kept an undeclared family inheritance outside Spain for over three decades.

Several weeks later High Court Judge Pablo Ruz summoned Pujol Ferrusola to appear in court for questioning as an official suspect in an investigation into his business dealings.

The court, based on police and tax office reports, suspects him and his former wife Merce Girones of transferring over 32 million euros ($41 million) to or from 13 countries including Andorra, Britain, Switzerland and Luxembourg, between 2004 and 2012.

During his court appearance on Monday Pujol Ferrusola told the judge that he only had seven million euros in foreign accounts during this period which were invested in bank accounts and fully declared to tax authorities.

He also denied during his five hours of court questioning having been paid commissions from construction companies that were awarded government contracts for public work projects, saying neither he or his father had the power to decide on the outcome of bids.

Two of Pujol Ferrusola's brothers are also under investigation for corruption and influence-trafficking, including Oriol Pujol who stepped down form a party leadership position last year.

The Pujol clan's fall from grace comes as the Catalan government plans to hold a referendum on whether the region should break from the rest of Spain on November 9, putting it at odds with the national government which insists the move is illegal.