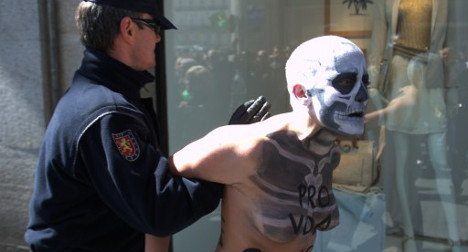 A member of feminist group Femen disguised as a skeleton is arrested during a protest in March against the controversial abortion law. Photo: Curro de la Torre/AFP

Nine months ago, Spain’s ruling Popular Party sent shockwaves through Spanish society when it announced it would ban women from opting freely for abortions.

The draft reform, approved in January, allows abortions only in cases of rape reported to the police or when there is a medically-certified threat to the mother's physical or psychological health.

The controversial move has caused divisions within the party and angered thousands of pro-choicers who have taken to the streets to voice their discontent.

Others have marched to support a draft bill spearheaded by Spain’s Justice Minister Alberto Ruiz-Gallardón.

"We are not going to withdraw the law," Spanish Prime Minister Mariano Rajoy vowed in May in an interview on radio station Cadena Ser.

But Spain’s El Mundo reported on Sunday that Rajoy has allegedly changed his mind, the newspaper referring to government and ruling party sources as where they had got their information from.

“There’s no consensus regarding this bill, it’s looking unlikely that it will be approved,” Popular Party sources purportedly told the centre-right daily.

“It will never get to the Parliament,” another source reportedly told El Mundo about a bill which was due to come into force in the last days of September.

Probably as a result of all the opposition it has faced, Spain’s conservative government decided in June to mildly soften the law by allowing women whose foetuses are malformed to have an abortion, regardless of whether giving birth poses a risk to the mother’s life.

That, according to El Mundo, still isn’t enough for almost all of the key players within Spain’s Popular Party, who agree “almost unanimously that the abortion law was a mistake”.

Political adviser to the PP Pedro Arriola has reportedly concluded in one of his studies that the controversial draft bill has been very damaging to the party’s reputation and its upcoming 2015 election campaign as many PP voters have felt “very uncomfortable” with the party’s stance on abortion.

Proof of this was the poor results of May’s European elections, the PP seeingits representation in Brussels drop from 24 to 16 seats.