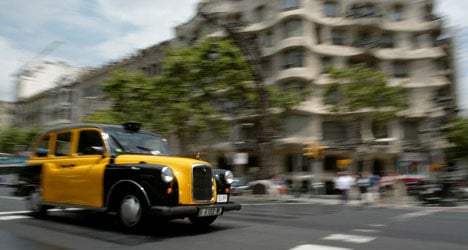 Taxis in Barcelona cost almost 34 per cent more than in the second most expensive Spanish city, Soria. Photo: LLUIS GENE/AFP

TripAdvisor looked at 52 locations to compare the average cost of a visit that included a night in a four-star hotel, cocktails for two people, a two-course dinner with bottle of house wine and a return taxi ride.

The cost of a night in a Barcelona hotel (€145) is almost that of the entire package in the nearby city of Tarragona (€143.73). A 3km return taxi ride cost €14.82 in the Catalan capital, some 34 per cent more than in the second most expensive city, Soria.

Although the TripAdvisor survey ranks Barcelona as most expensive it does not seem to deter tourists from flocking there in ever-greater numbers.

Some residents are unhappy with the number of visitors and claim that the influx is destroying the city's character.

The presence of drunk and naked tourists in some residential areas had led to protests.

Despite this, Barcelona remains the most popular tourist destination in Spain. According to a study by Esade Business School, it is also the European tourist shopping capital: almost 34 per cent of the average tourist's budget is spent in shops compared with just 28 per cent in London and 24 per cent in Paris.