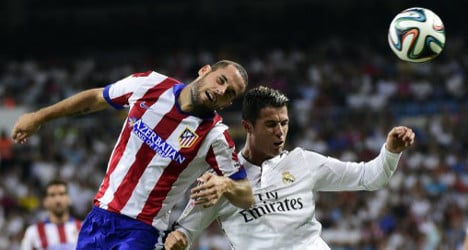 Real Madrid and La Liga champions Atletico meet again at the Santiago Bernabeu for the third time already this season with Atletico having emerged victorious over two legs in the Spanish Super Cup last month.

Los Blancos' victory over Atletico in the Champions League final in Lisbon meant both teams from the capital ended the season happy.

But Atletico boss Diego Simeone claimed his side's triumph in breaking Real and Barca's hegemony of the Spanish title was the greater achievement.

"For me to win the league is as good as it gets because it is what the fans live day-by-day," Simeone told Argentine newspaper Clarin.

"A league is 38 games competing against two enormously powerful teams. To maintain their rhythm is almost impossible and we managed to do it."

Atletico's 1-0 win at the Bernabeu 12 months ago proved the launching pad to their title run and they could move four points clear of Real should they repeat the feat this weekend.

Carlo Ancelotti's men endured a horror show in San Sebastian just before the international break as they let a 2-0 lead slip to lose 4-2 to Real Sociedad.

Madrid were without the injured Cristiano Ronaldo due to his ongoing knee problems for that defeat, but he is hopeful of returning to face Atletico having also sat out Portugal's shock 1-0 reverse to Albania.

Real's other injury concern surrounds right-back Dani Carvajal, who had to pull out of Spain's 5-1 thrashing of Macedonia due to a hamstring problem.

The 22-year-old is not expected to recover in time and, according to Spanish press reports, Ancelotti will switch one of centre-backs Raphael Varane or Sergio Ramos out to the flank to help combat Atletico's height advantage at set-pieces.

Earlier on Saturday, Barcelona will look to continue their 100 percent start to the new season when they host Athletic Bilbao at the Camp Nou.

Much of the build-up to the game has been surrounded by off-field political issues as Barca will unusually wear their red and gold striped away shirt, the same colours as the Catalan flag, to commemorate the region's loss of sovereignty 300 years ago.

However, Luis Enrique's men should be raring to go on the field as Gerard Pique, Andres Iniesta and Leo Messi all pulled out of their international commitments due to minor injuries and are expected to return.

Rafinha Alcantara has been one of those to benefit from Barca's early-season struggles with injuries and suspensions as he has started both league wins to date.

And he insisted he welcomes the competition of competing against some of the best players in the world for a place in the side.

"For me it is a privilege to have these players as teammates," he said on Thursday.

"To be able to play when the best players in the world are in your squad is a great source of pride.

"It is very difficult to play for this Barca side, but I feel more joy than pressure. To have players like Iniesta and Xavi as teammates is a luxury and I have to learn from them."

Athletic Bilbao's trip to the Camp Nou will be an early tester of their abilities against the best ahead of their return to Champions League action for the first time in 16 years next week.

However, boss Ernesto Valverde believes they can take three points back to the Basque Country despite having lost in each of their last 10 visits.

"We will have our chances and therefore we have to be at 100 percent and hope Barcelona have an off day," he said.