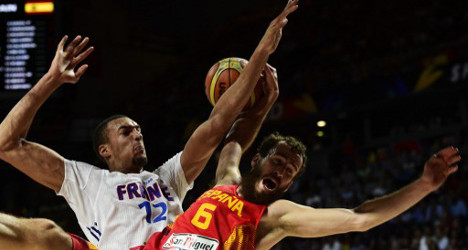 Spain's Sergio Rodríguez moments before falling awkwardly on his back. Photo: Javier Soriano

The Serbians had had little trouble in disposing of Brazil earlier on Wednesday coasting to an 84-56 victory.

France's victory came in the light of Spanish paper Marca calling for Spain to destroy their opponents.

However, just as their predecessors did in 2007 when they hosted the European Championships and lost to Russia so they faltered against an impressive France outfit, who are missing several of their stars including their icon Tony Parker.

However, they showed little sign of nerves and put to an end the record of Spanish superstar Pau Gasol's record of never losing to them.

France's impressive captain Boris Diaw said that he and his team-mates had made important adjustments after the pool phase.

"I am very proud of the players," he said.

"We have achieved our ambition prior to the finals of reaching at least the semi-finals. We knew it would be a difficult match to win but we studied the Spanish closely.

"We played without restraint so as to get the best out of ourselves. We gave it our all as if there were no more matches to come in the next few days.

"However, now we will savour the moment and then focus on the semi-final."

Serbia lost to Brazil in group play but blew out the South Americans in the second half thanks to 23 points from Milos Teodosic while Bogdan Bogdanovic scored 12 points and both Nenad Krstic and Miroslav Raduljica had 10 points.

Brazil got 12 points from Anderson Varejao and Marquinhos Vieira but the team once again failed to finish in the top four of the Worlds – their seventh straight missed opportunity.

Teodosic started the game hot in the first quarter with eight points in helping Serbia build a 14-9 lead. The Europeans were up 21-17 after 10 minutes.

After Alex Garcia nailed two three-pointers to give Brazil the lead 23-21, the Serbs went on an 8-0 run. Brazil answered with nine straight points for a 32-29 lead but Serbia scored the final eight points of the half for a 37-32 halftime cushion.

Serbia once again had a strong start to the second half and won the third quarter 29-12, keyed by a seven-point possess after a foul and technical fouls on both Tiago Splitter and Nene Hilario.

Bogdanovic added a three-pointer in the next possession for a 53-36 lead, which was 66-44 after three quarters – deciding the game.